Travertine and Its Attributes

With a number of products in our Spring introductions made with travertine, we wanted to share the background as to how the material came to be used in architecture and design. We illustrate the post with images of the new products made with the textural stone, including the Boyles offerings, which expand this popular family of products that we’ve previously released with metal tops in brass and silver.

This closeup of our Boyles Travertine Large Tray illustrates the attributes of this material.

Travertine is a sedimentary limestone formed when water from hot springs seeps through carbonate minerals. As the mineral- and carbon dioxide-rich water washes over limestone formations, the liquid permeates the stone, pitting and scarring it. Changes in temperature release the carbon dioxide from the water into the air, leaving mineral pockets that capture moss, algae, and debris as re-crystallization occurs, enhancing the colors and character of the stone. The natural rock is porous and full of small cavities, which brings it the beautiful texture for which it is known.

The console table has a stone top and shelf made of the beautiful material.

The largest deposits of travertine in the world are found in Tivoli, Italy, the locale giving the material its name. The Tivoli district, which is near Rome, was originally called Tibur, from the Latin tiburtinus. As the etymology moved forward, the word morphed from tivertino into travertino, which means “Tibur stone.” The springs around Tivoli are heated by volcanic activity associated with nearby Mt. Etna, which provides the perfect environment for travertine formation.

The Boyles Travertine Accent Table was one of the bestsellers during High Point Market.

The first noted use of the stone was in Vyšné Ružbachy in Slovakia, which was settled during the Paleolithic period. Architecture made of travertine, which was culled from a nearby mine, provided scientists with the archeological evidence to date it to antiquity. It’s no surprise that the village is famous for the therapeutic waters of its hot springs. As early as 3200 B.C. in Egypt, the stone was being used in construction; and the Etruscans used travertine to build a wall around the town of Perugia in the third century B.C. They also mined the material for tombs, churches, and the town aqueduct.

The demi-lune is a graceful new introduction in stone.

The Turkish city of Hierapolis, which sits in the area of Pamukkale and is surrounded by hot springs, was built almost exclusively with the material. The ruins of the Roman theater there, which is a well-preserved amphitheater constructed around 200 B.C., is still intact. The artistry of its ornate stage and the regimented rows of seating is renowned. Though the Romans had been using it for over a century, it wasn’t until Julius Caesar’s rule in the first century B.C. when Marcus Vitruvius Pollio recorded the properties and characteristics of travertine in detail.

This Side Table is a new introduction in the Boyles lineup.

Two landmarks in major European cities are made of the material: the largest known building made entirely of the stone is the Coliseum in Rome, which was completed in 80 A.D. by Emperor Vespasian to honor the grandiosity of the Roman Empire; the Sacre Coeur in Paris is the other. Constructed of Château-Landon stone, a variety of travertine that bleaches over time to a gleaming white, it was built between 1870 and 1914 at a cost of 40-million francs. The Romano-Byzantine triple-domed design, its magnificent soaring ceilings, and the intricate mosaic work makes the Basilica one of the premier tourist destinations in Paris.

Along with the tables and trays, we have two new lamps in travertine—the Gentini Table Lamp above and the Goletta Table Lamp below. Tom Caldwell had a 1920s Contemporary design aesthetic in mind when he created both of these table lamps. The geometric shapes are made from a mix of beige travertine with subtle nooks and crannies, and smooth steel in an antique brass finish. The coolness of the stone and the warmth of the metal are nice contrasts. The shape of the bone linen shades perfectly echoes the scale of these table lamps.

Other new introductions not shown here are Boyles elongated and small trays, shown below with the large tray, and a cantilevered side table. To see all of our products made of this stone, simply type “travertine” into the search bar on our website.

Ours is a Material World 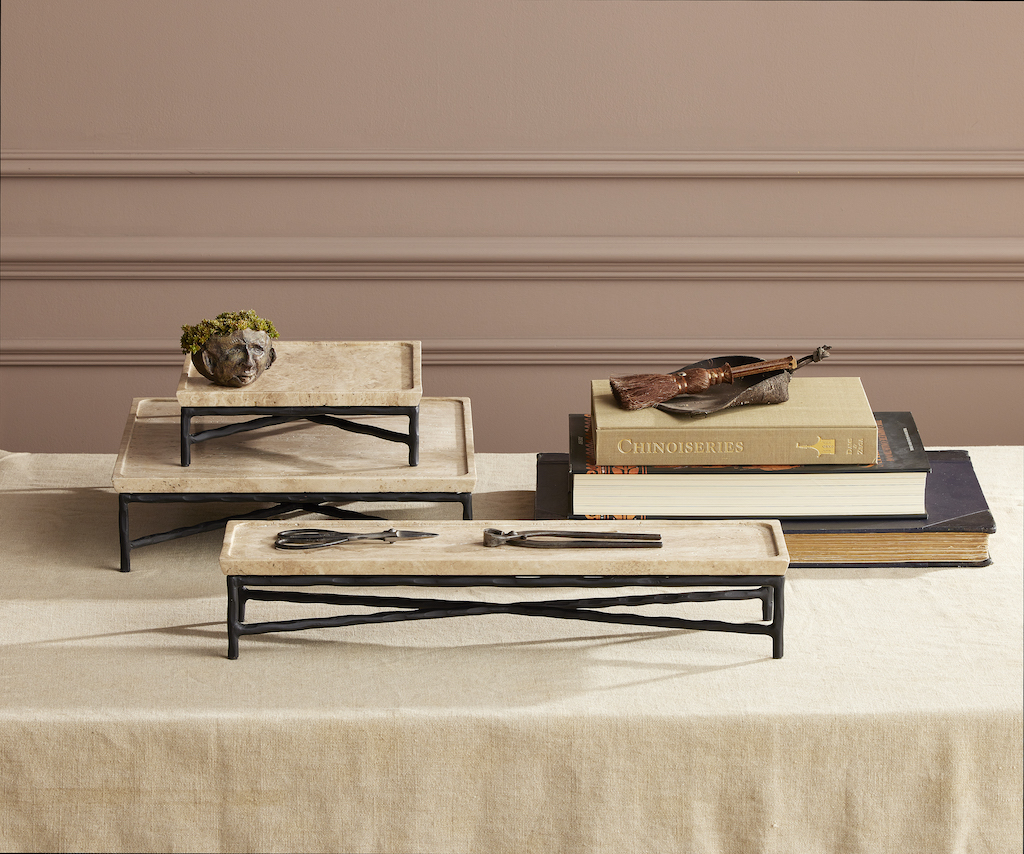 As we plan new products, which can be years in the making, we are often struck by the long histories of the materials sourced and of the techniques the craftspeople and artisans use to create them. We hope you’ve enjoyed this romp through the history of this stone with its mysterious formations that stretch so far back in time. Using materials with such durability and illustrious backgrounds is one of our passions, and we hope it shows.