We’re absolutely thrilled to be featured in a number of trend categories in the 2022 issue of Lighting magazine. The publication is a partnership between the American Lighting Association (ALA) and Meredith SPV, which publishes a number of special interest magazines across a number of categories within the home furnishings industry. We’ve been a member of ALA since 2011 so we can say first-hand what an important and dynamic organization it is. If you would like to request a free copy of the magazine, you can do so on their website.

A Nod from Lighting Magazine 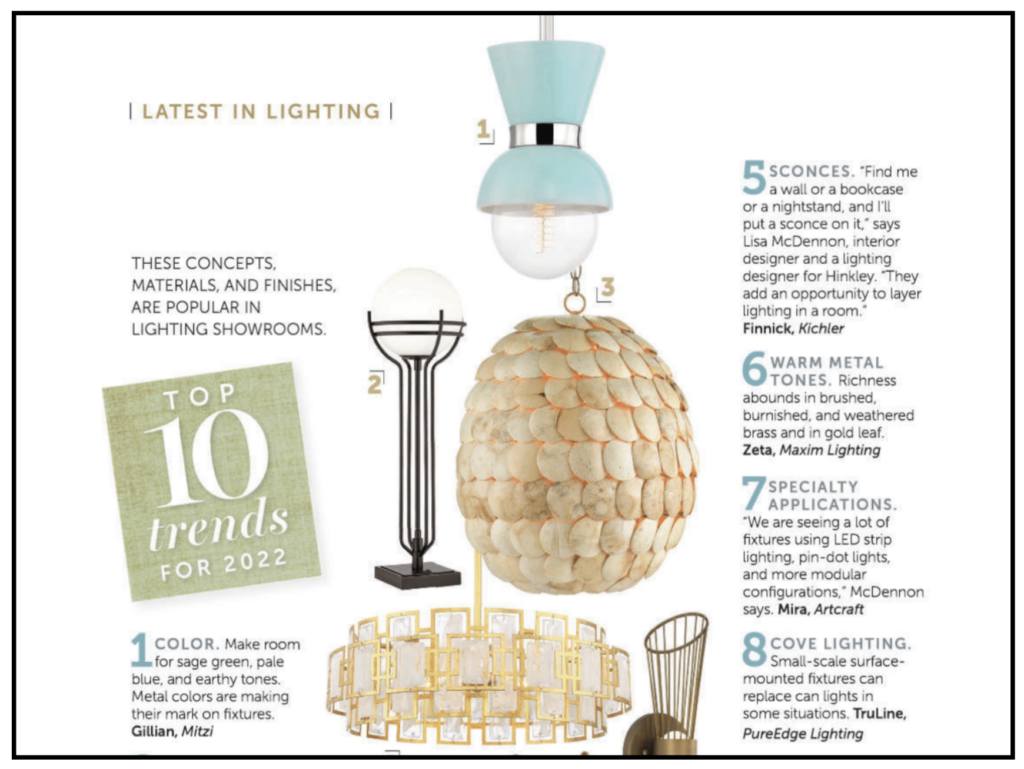 Our Buko Pendant is featured on the page listing the Top 10 Trends for 2022, a shoe-in for the “naturals” trend.

The images that accompany this post are snapshots of the pages of the 2022 edition of the magazine that features our products. Simply click on the images to visit the product profile. We asked Larry Lauck, the Executive Vice President of ALA, to share with our readers how the publication came to be. “We launched the Lighting magazine when I was having one of my regular meetings with Meredith Publishing to discuss our national advertising plans for promoting the lighting industry,” he explains. “It was 2005 when I was with Meredith SVP’s publisher Mark Josephson when we began discussing the possibility of creating an industry magazine, as most lighting coverage was just a mere mention in other home remodeling magazines and newspaper columns.” 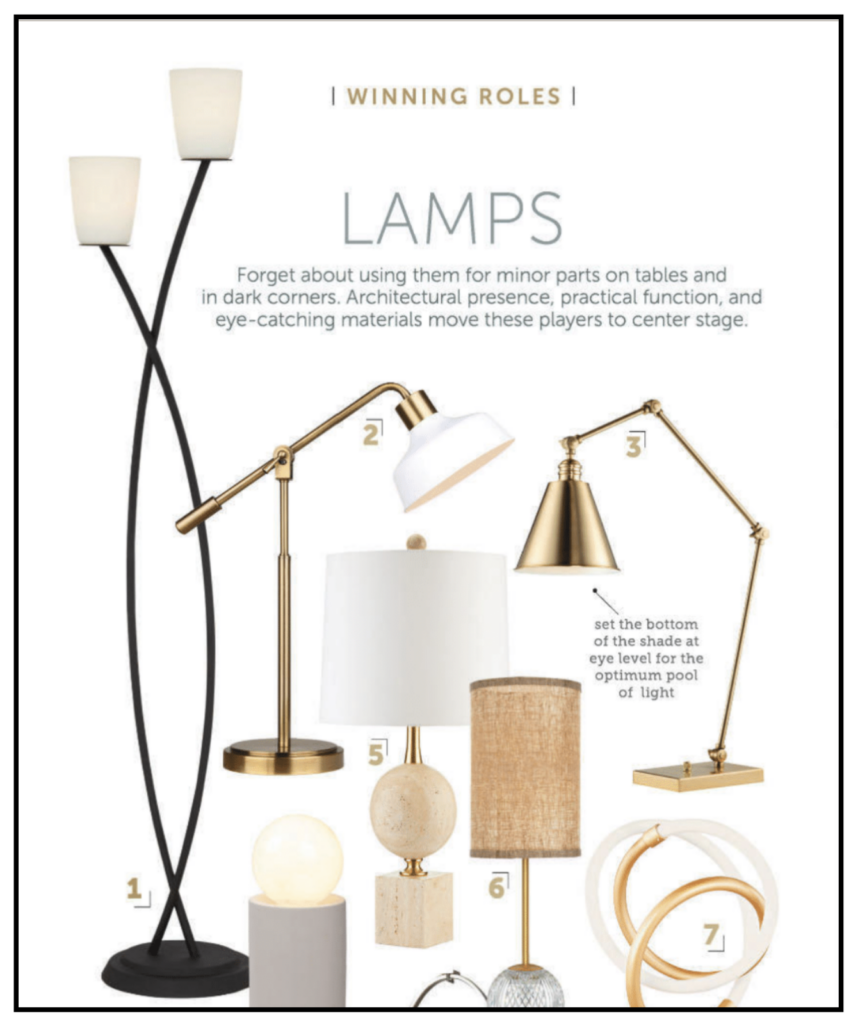 In the section of Lighting magazine dubbed “Winning Roles,” our Adorno Lamp, number 5, is front and center.

After deciding that only ALA manufacturers would be featured, the organization and publishing executives crunched the numbers to see if the effort would be successful, deciding it would.” The first Lighting magazine was rolled out in 2006 at the ALA Conference at the Wynn Las Vegas Resort,”Lauck says. “Other trade associations contacted ALA to try to launch national consumer magazines, but to no avail. Still to this day, the annual edition of the Lighting magazine is featured on prominent newsstands, and in ALA showrooms across the U.S. and Canada.” 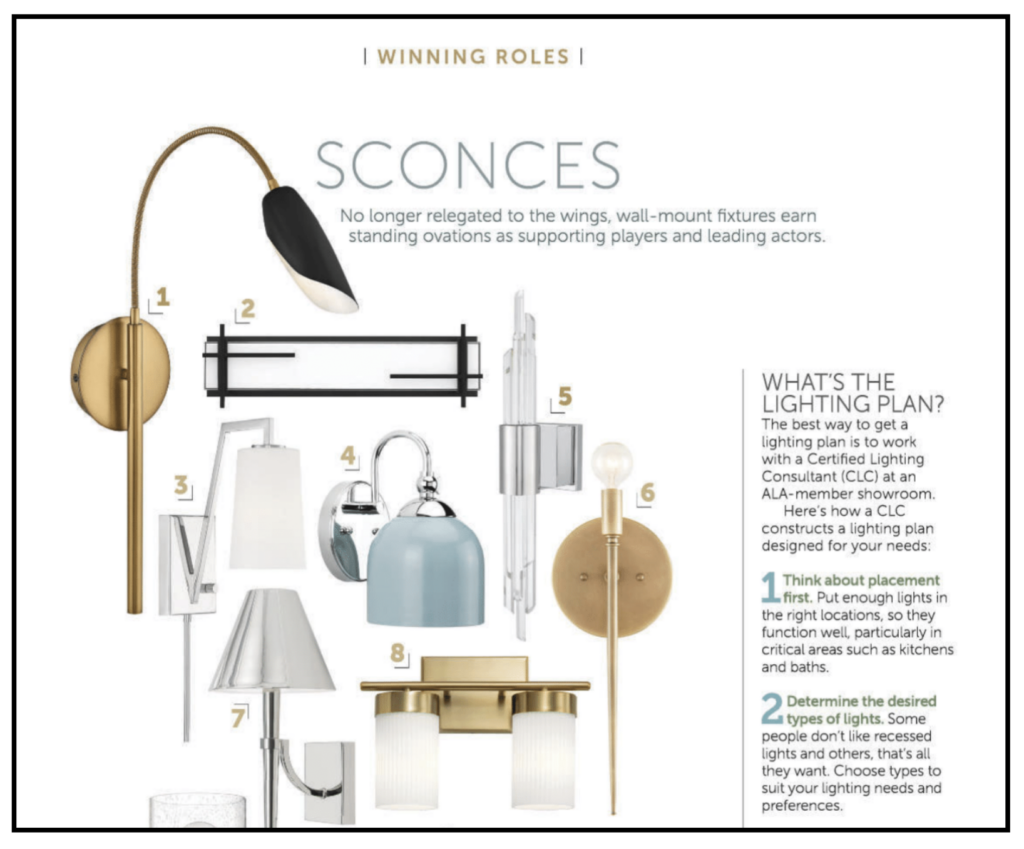 Also in the “Winning Roles” section is the Bel Brass Canto Sconce, number 6.

Lauck adds, ‘The magazine is solely supported by funds from the ALA Marketing and Advertising Program, and by advertising from ALA manufacturers. Articles and photographs from the magazine are used for other Meredith publications and are featured on such prominent websites as BHG.com, the home site for Better Homes and Gardens. This past year the magazine delivered some 85 million impressions as consumers visited the ALA website looking for the magazine and their nearest ALA showroom. The magazine is under the auspices of the ALA marketing and public relations committee.” 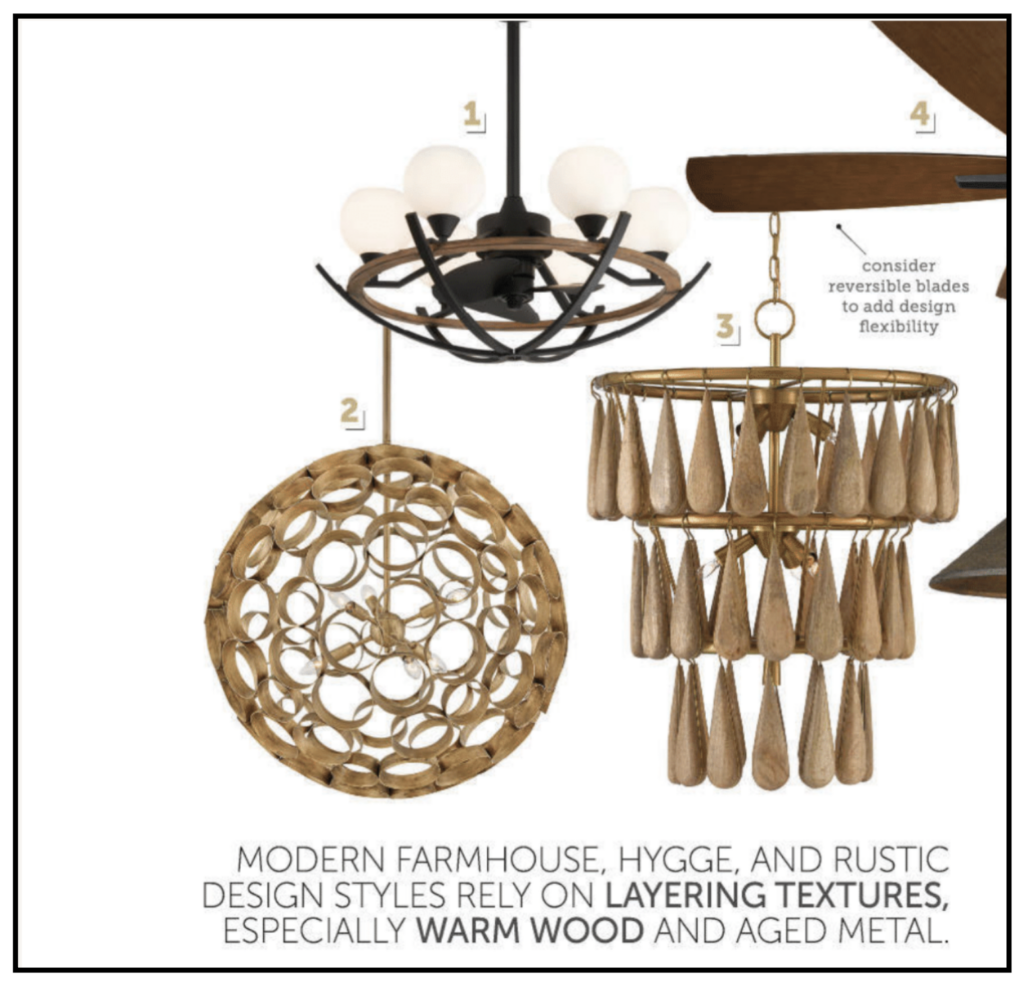 The Savoiardi Pendant is among the products featured in the Comfortable Attitude trend.

The ALA is a long-standing industry trade association that was created in 1949. It was managed by a consulting group for several years, but industry leadership provided most of the management direction up until 1994 when ALA hired its first professional staff with Dick Upton being named the new president and CEO. We are thrilled to be a part of this esteemed group and we thank Mr. Lauck for filling us in on how the organization has produced such a lovely magazine. 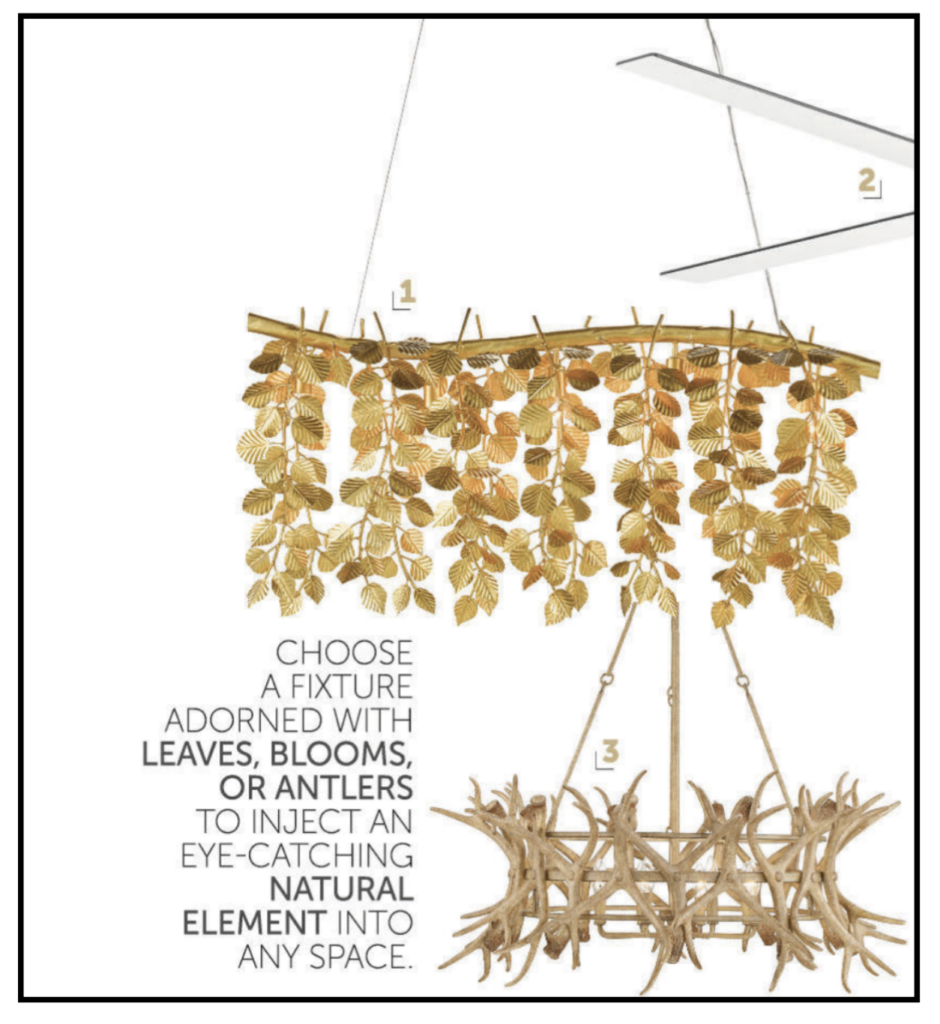 Four of Aviva Stanoff’s products were tapped for several different trends in Lighting magazine: the Golden Eucalyptus Rectangular Chandelier was chosen for the “Eclectic Whimsy” category. Editors tapped it for its leaf motifs, which are made from metal in a contemporary gold leaf finish. Aviva says of this family of products, “Being a California native, eucalyptus has always surrounded me. The scent is smooth, minty and elegant, always evoking a sense of home and shelter.” 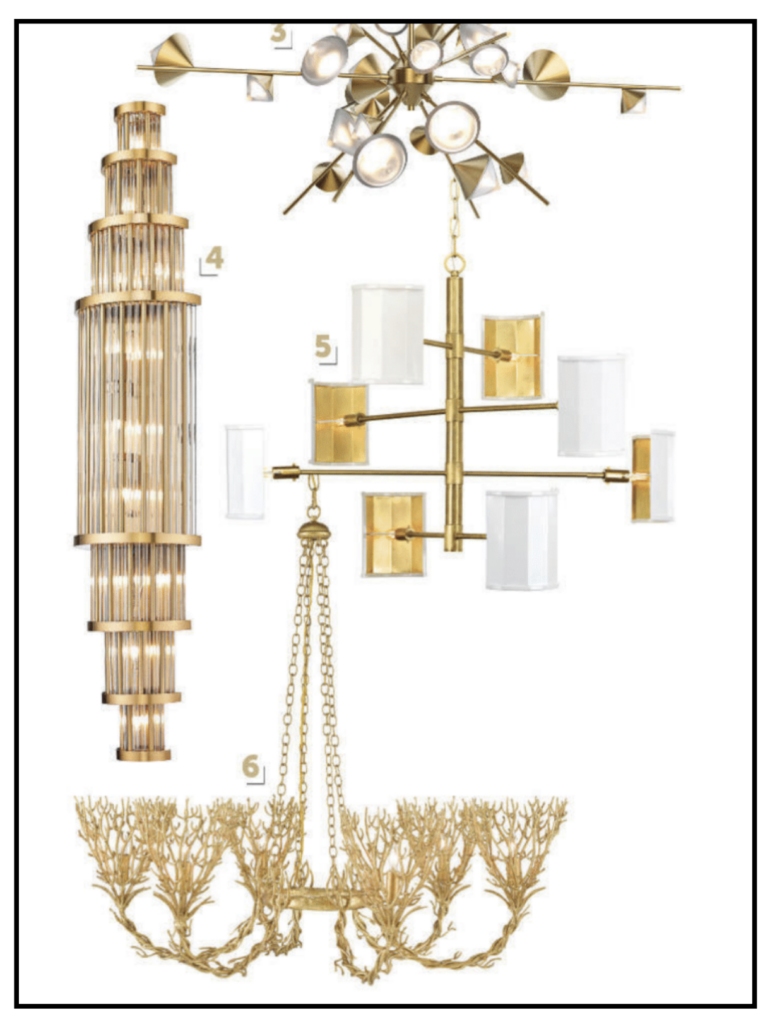 About the “Traditional Appeal” trend, the editors noted their choices are perfect for bedecking rooms with timeless and tasteful designs that read like fine jewelry to endow spaces with elegance. This category includes the Sea Fan Chandelier, also by Aviva, who says of its inspiration, “The sea has always been by my side and has kept my secrets. I have a deep reverence for nature and particularly the ocean, and sea fans that live underwater remind us that we live among tides, that life is cyclical, and that there is beauty in believing in magic.” 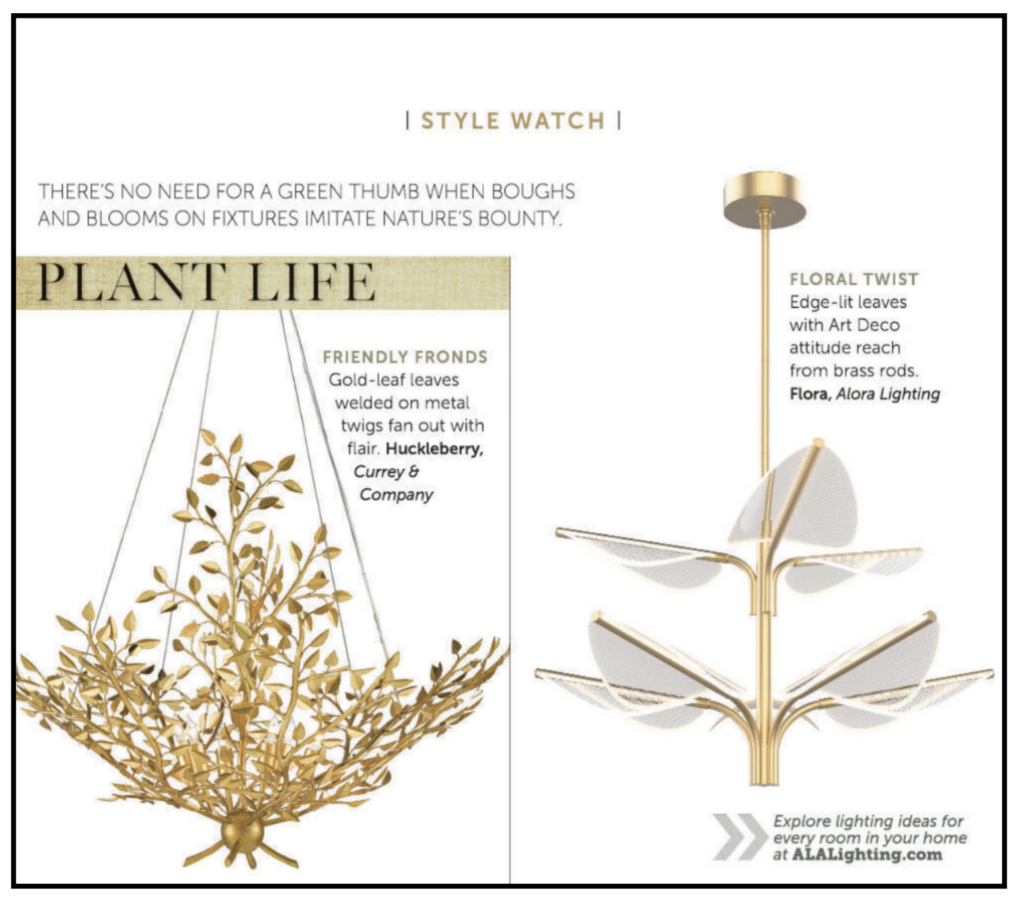 The “Style Watch” section of the magazine includes the Huckleberry Chandelier, about which Aviva says, “Traced back to Arthurian Lore, it is said huckleberry garlands were given to knights of the kingdom for coming to the service of a damsel. They would approach the ladies, lower their lances, and give the small branches as symbols of gratitude; much like medals. I love that: the romance of ancient lore is a beautiful thing to honor.” 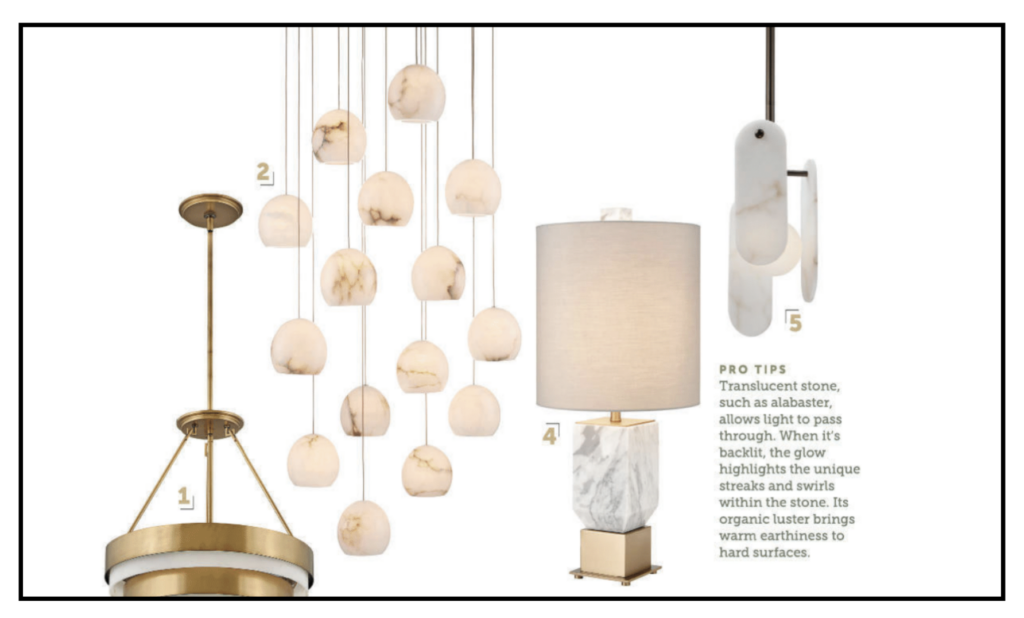 The Lazio Round 15-Light Multidrop Pendant as featured in Lighting magazine.

Also in “Style Watch” are the Lazio Round 15-Light Multidrop Pendant, above, and the Queenbee Palm Chandelier, below. The Lazio has luminous shades carved from natural alabaster. The veining in the material makes each shade unique because each stone taken from the earth will have its own personality. The shape of the shade and the thinness of the stem on which it dangles are the simplest of forms. This leaves the natural material to shine. The painted silver finish also helps to keep the design light and airy. 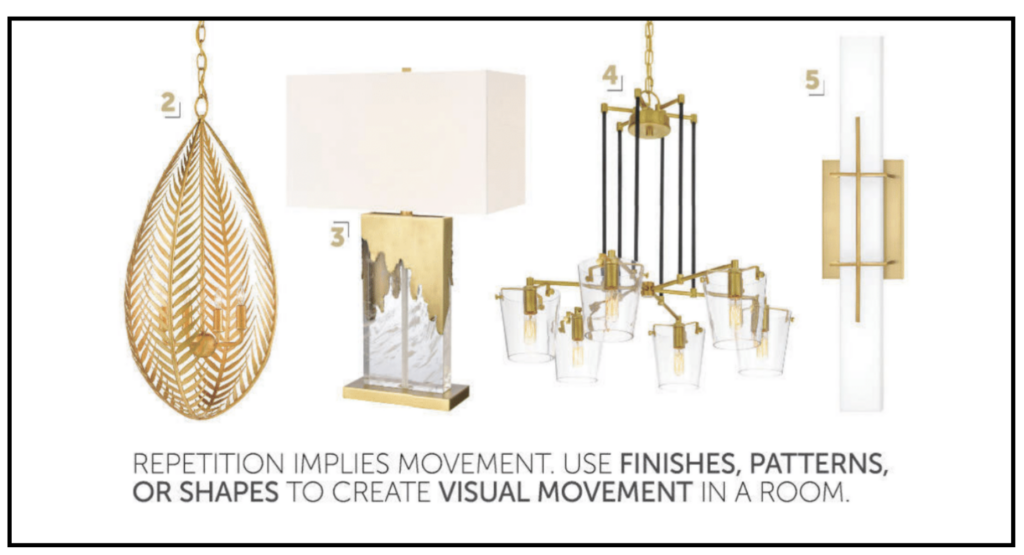 The Queenbee Palm Chandelier pays homage to the graceful movement of palm leaves blowing in the wind. The fronds, finished in contemporary gold leaf, arc gracefully toward the top of the fixture to form a tear drop-shaped shade. Aviva says the design was inspired by the places she associates with calm, with resetting, and with recharging: beachy, ocean, tropical places. “When I see these gorgeous palms and their fronds rustling gently in the wind, it reminds me there is grace in resting, in going with the flow, and in letting the wind blow you around until you, most importantly, settle.” 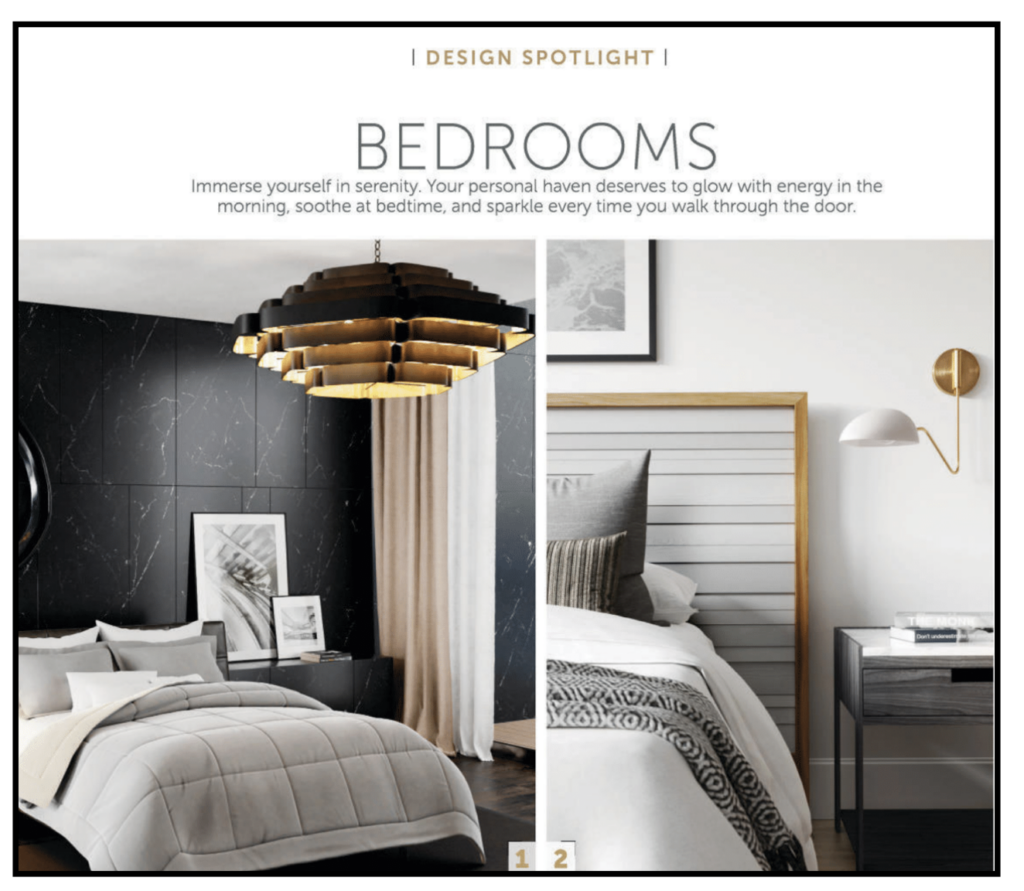 The Bailey Chandelier featured in a bedroom in Lighting magazine.

Our Bailey Chandelier was a standout to editors for bedrooms. In the Bunny Williams collection, the Bailey Chandelier is a large chandelier with a two-tone finish: contemporary gold leaf on the interior and French black on the exterior. Ambient light radiates between the ribbons of wrought iron in a warm glow due to the gold interior. The black chandelier has nine lights so that glow is abundant. 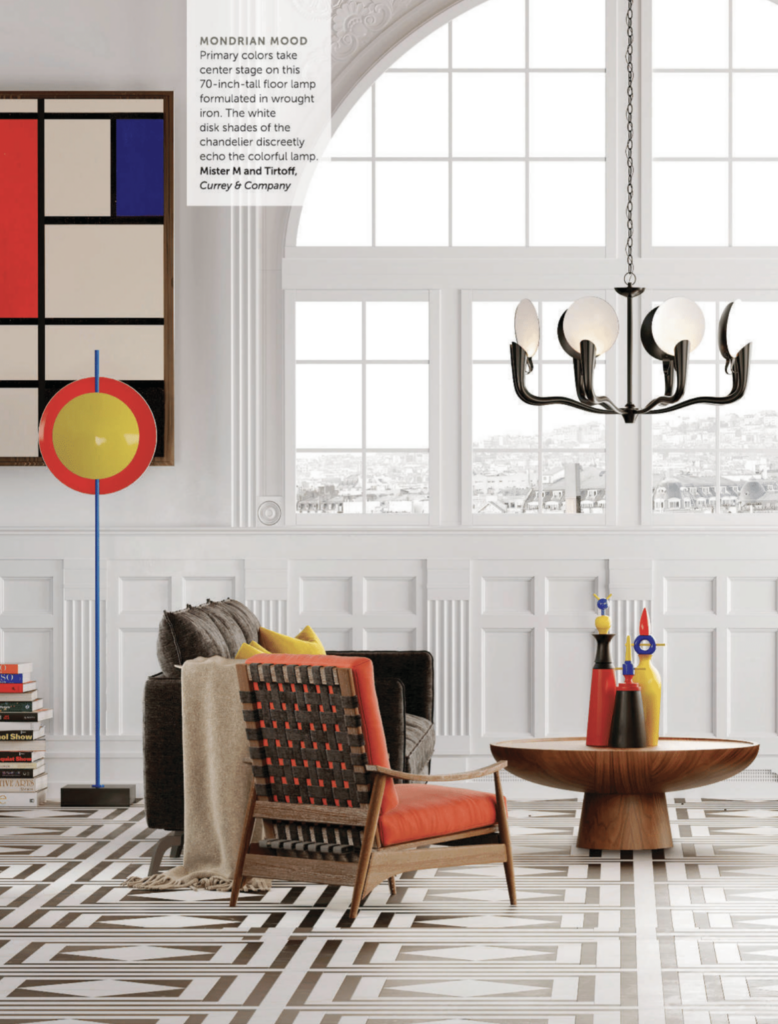 The Tirtoff Chandelier and our family of Mister M products were featured in the “Modern Edge” section of the magazine. The editors explain this trend as, “Always keeping an eye to the future with industrial and organic looks that salute their form-meets-function roots with clean lines and striking shapes.” We would like to thank the ALA and the editors for highlighting our products, which are in such great company!

Geek Out at the Science in Design Summit 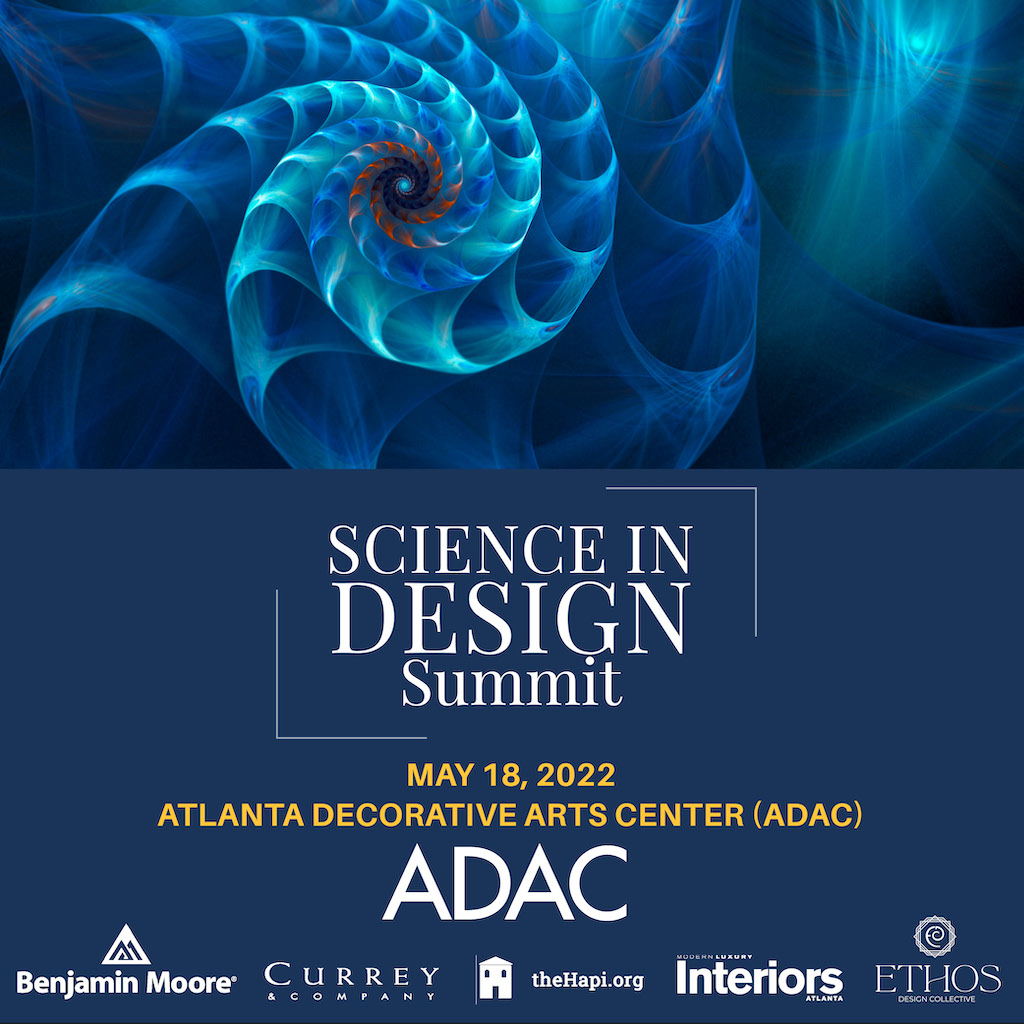 We’re proud to be a sponsor of the ADAC “Science in Design Summit,” the first ever study of the health benefits of fine design. Scientists and medical professionals at leading institutions such as Johns Hopkins University, the Mayo Clinic, the University of Texas, among others, have now documented the health benefits of beauty and fine design. The convergence of science and design, or “neuroaesthetics,” is changing the future of the design industry and we will be there on May 18 between 8:30 a.m. and 5:00 p.m. to explore the subject. This is a Trade Only event and those attending can earn CEU credits. If the event hasn’t been on your radar, you can sign up here. You can also find more details with this ADAC Facebook link.

Travertine and Its Attributes →