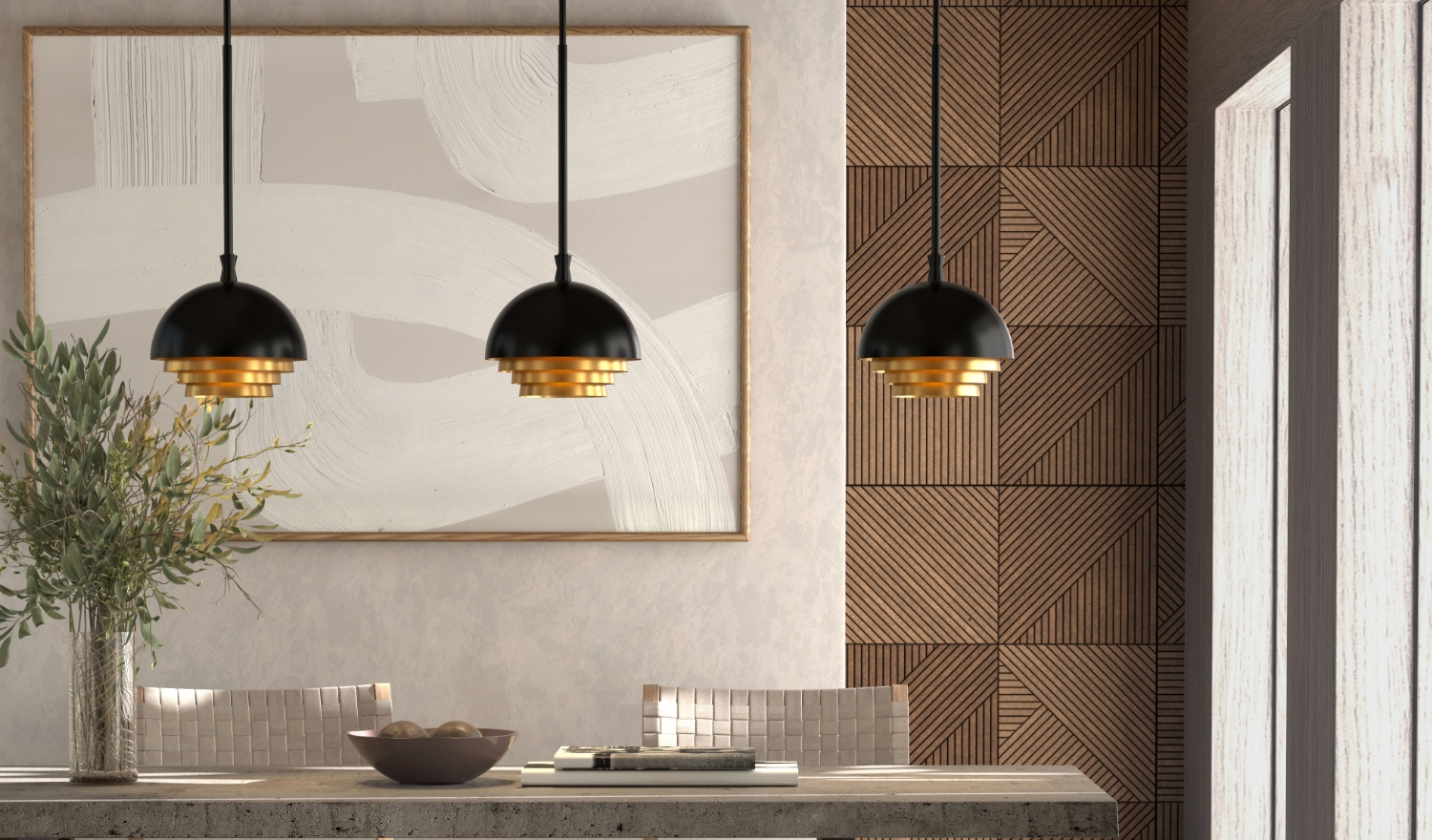 By way of saluting a number of our new summer introductions in deep, rich black, we delve into the history of the color, though some would say it’s not a color at all. Since the beginning of time, black accents in interiors satisfy the human desire to create beauty and contrast, as you can see in the image above with the Salviati Pendants as strong black accents. This is not an over-statement, as Paleolithic caves hold illustrations of handprints or stencils of human hands; abstract designs containing dots and crosshatched lines; and large animals—both carnivores and herbivores—most of them now extinct. 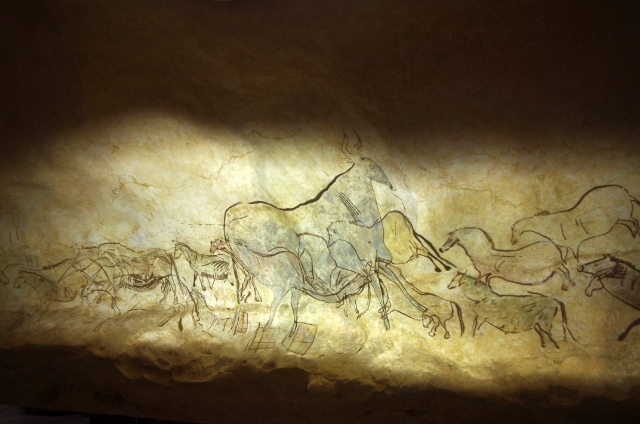 One of the ancient drawings in Lascaux representing the movement of herds of equines and cattle. Image in Public Domain.

The crude drawings on the walls of the “decorated caves” are most often in red pigment, which would have been made from iron oxide, natural hematite, or heated goethite; and black pigment, made from charcoal or manganese oxides. These caves can be found on every continent except Antarctica, and there are at least 350 in Europe alone. The image above is underground in Lascaux, a network of caves near the village of Montignac in southwestern France. Over 600 parietal paintings cover the walls and the ceilings of this collection of caverns. 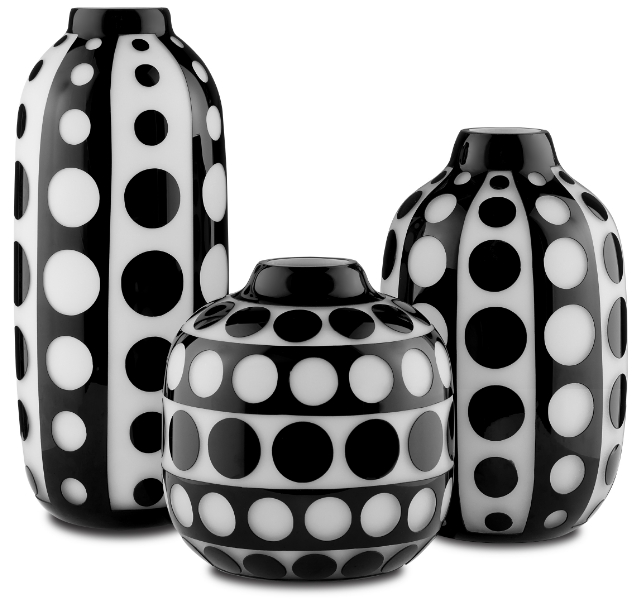 The Cicero Vases, available in small, medium, and large, were created through an intensively complex process of layering clear, black, and white glass in that order. The dynamic profiles with their mod geometric surfaces swirl with personality. Because the glass is layered on, there are slight raised areas that can be felt. This and the fact that the white layer of glass has to be sand-blasted away to reveal the black layer illustrate the artisanal quality of the vases, which serve as remarkable white and black accents in interiors. 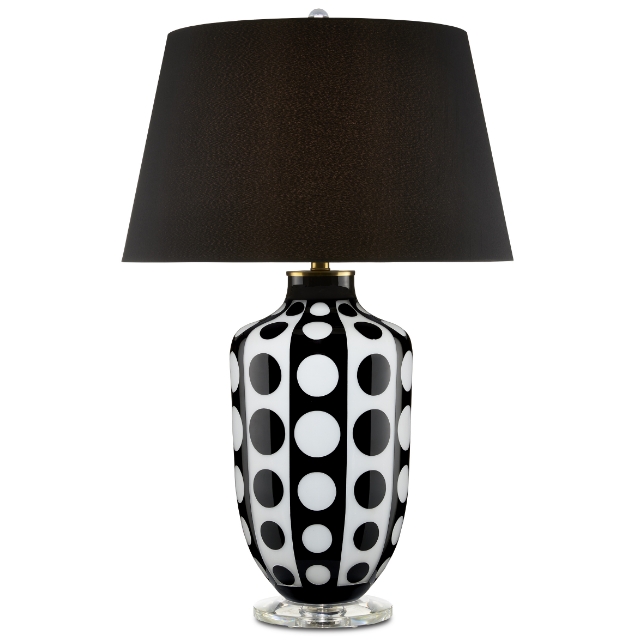 Made of glass flowing with charismatic geometric patterns that include black and white stripes and polka-dots, the Cicero Table Lamp has an elegant profile. The process that glass artisans use to realize the interplay of colors and shapes is hard-won, as it involves melding three layers of glass in black, white, and clear frosted. Steel hardware in a polished brass finish gleams, as do the finial that fastens the black shantung shade to the lamp and its base, both made of optic crystal. 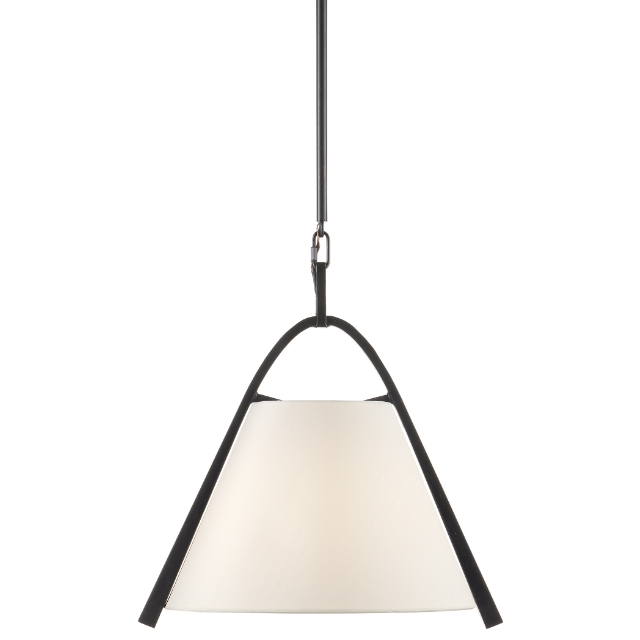 The Frey Pendant is made of simple materials, but its profile is extremely stylish. Ian Thornton designed the black pendant with its frame that elegantly wraps around the white fabric shade. Made of steel in a satin black finish, the fixture nails the black and white design trend. The fact that it is suspended by a stem instead of a chain brings it a contemporary flair. 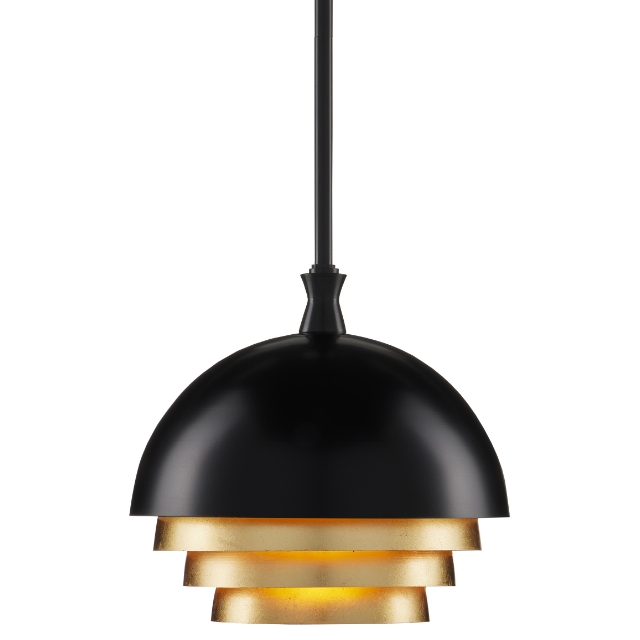 The cascading forms that make up the shade of the Salviati Pendant are fashioned from steel in a contrasting mix of deep black and luminous gold leaf. Telescoping rings are inserted into the larger dome in a way that allows the illumination to reflect on each of the gold surfaces for an enhanced glow. The simplicity of the stem and hardware from which it hangs heightens the contemporary feel of this black pendant that was designed by Clarence Mallari. 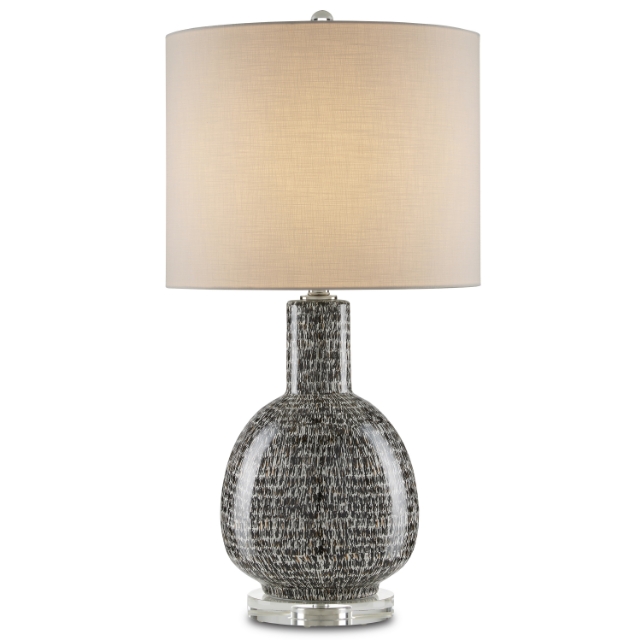 The Marbury Table Lamp, which is made of ceramic, has a textural motif flowing along its surface in black and white with flecks of brown to enhance the warmth of the design. The off-white linen shade is fastened to the black lamp with an optic crystal finial that glows just as brightly as the round base in the same material. Though it is one of the softer black accents in interiors in this post, it has a strong character thanks to its shape and texture. 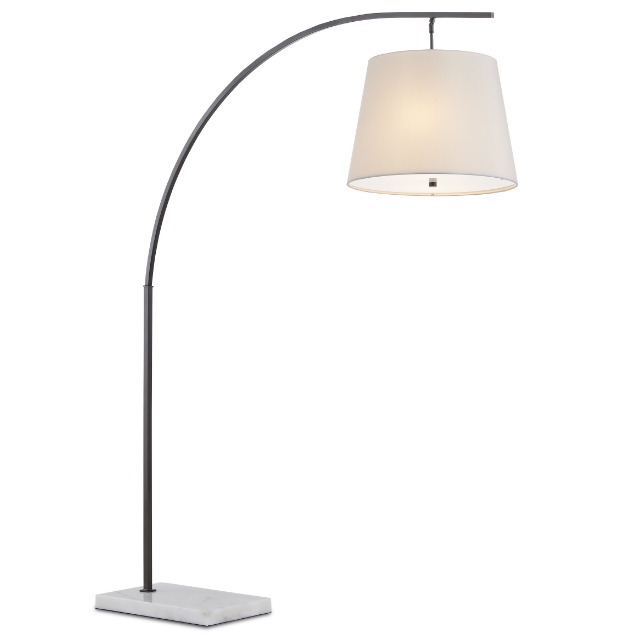 The angular arc of the stem of the Cloister Bronze Floor Lamp, the way the shade dangles, and the minimal shape of its base makes it an exemplar of contemporary design. The clean way the stem is fastened to the base and the pared-down lines of the white linen shade enhance the black floor lamp’s modernity. The acrylic diffuser fastened by the petite button finial is a design detail of note. 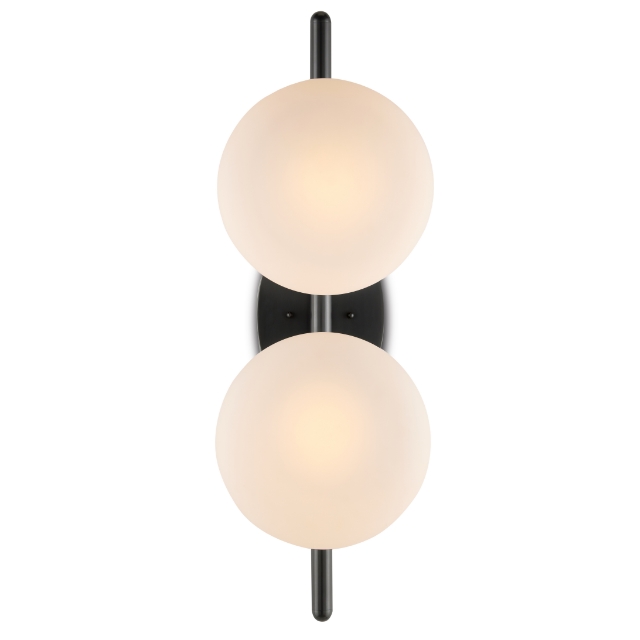 A throw-back to the Industrial Age, the Solfeggio Double Wall Sconce is made of metal in an oil-rubbed bronze finish. Attached to the frame are two opaque glass shades in a time-honored shape that has been popular for centuries. They will glow softly when the large-scale black sconce is switched on to create a luminous contrast of dark and bright. A design detail worth noting is how short rods extend above and below the back plate. With this piece, the white globes take center stage when the fixture is switched on but when it’s not it is one of our strongest black accents in interiors. 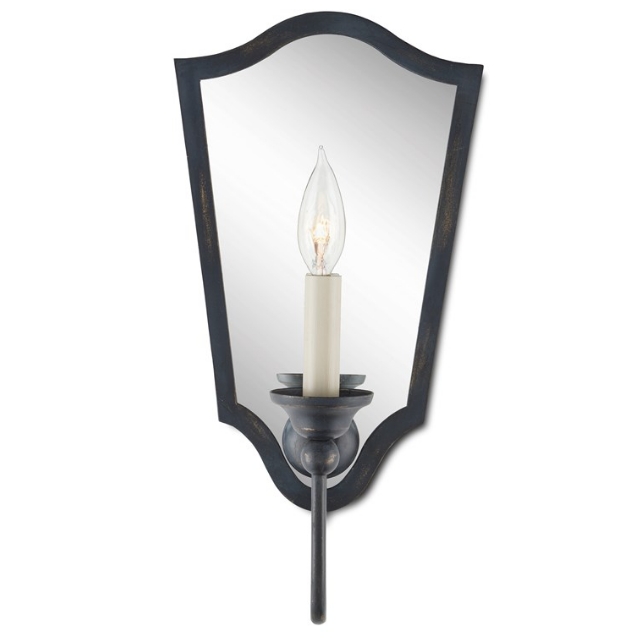 The simple silhouette of the Marseille Wall Sconce has a classic elegance that references French country style. An antique mirror wall plate surrounded by a frame in a French black finish enlivens this black sconce, which is certified for damp locations. We also offer it in a silver Granello finish. 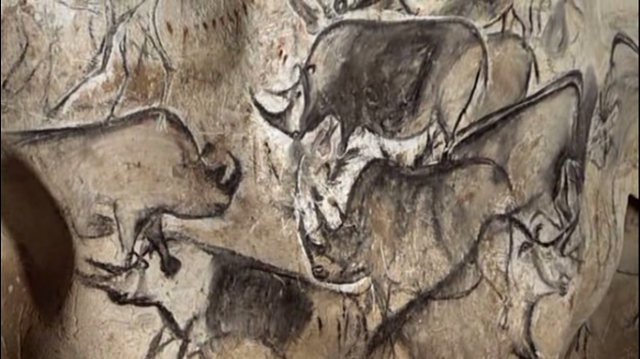 An artistic depiction of a group of rhinoceros was completed in the Chauvet Cave 30,000 to 32,000 years ago. Image in Public Domain

If you look closely at the cave images in this post, you can see that the animal figures have layers of superimposed lines, which historians say were created over time when new arrivals came to the caves and painted over the lines that were already there. They see the caves as both museums and art schools where people learned to paint from those who had come before them, and then went on to apply their skills to the next suitable cave they came across. In the process, and with some help from flickering lights, they also created animation. As humans painted over older artwork, moved on, and painted again, over tens of thousands of years, cave art—or, in the absence of caves, rock art—evolved. You can draw a direct line through history to Piet Mondrian’s accentuating black lines and Julian Opie’s lit, digitized figures that continuously move.