Continuing a tradition that only comes around once a year, we share our newest and most popular introductions for furnishing a white Christmas. From lamps and accessories to wall sconces and chandeliers, our white offerings are growing exponentially. Included in our new introductions is the Pear Set, a duo of glassine white sculptures with gold stems. They are arranged with the Dog of the Moon Bronze and the Ganav Figure Set, both of which are also new, set against a backdrop of bold geometrical wallpaper by Thibaut. 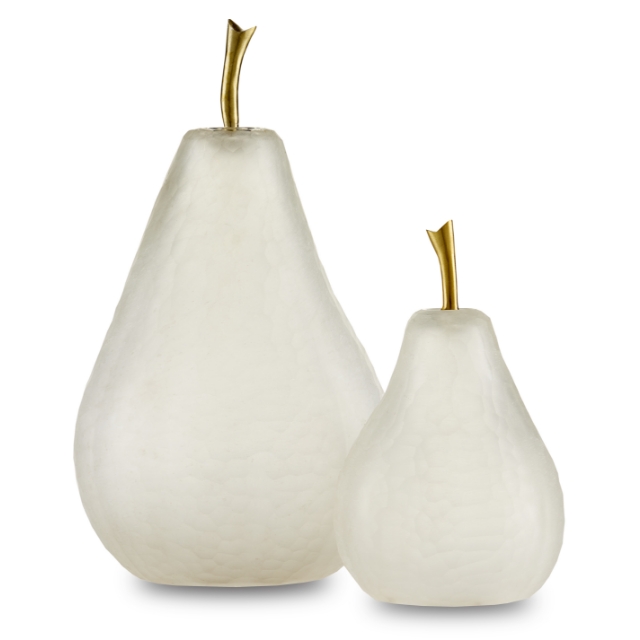 Made of frosted glass with brass stems, the Pear Set includes large and small matte glass sculptures in the shape of the juicy fruit for which they are named. The texture along the surface that provides the white sculptures with added decorative value is hand-cut, which makes these translucent white accessories very artisanal. They are hollow inside, so placing them in a well-lit spot means they will glow from within when reflecting natural or man-made light. 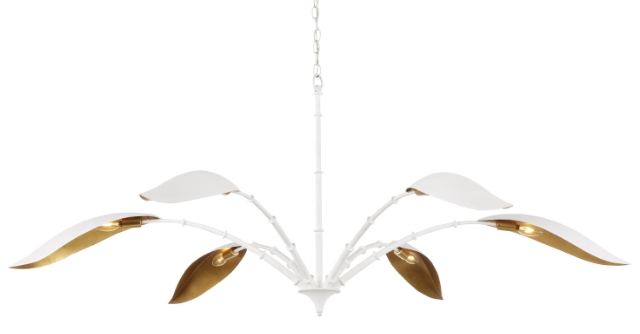 As if it has sprouted three pairs of lily petals that arc delicately away from each other, the Yuriko Chandelier is a crisp white creation until the interiors of those petals are glimpsed, as they are finished in a contemporary gold leaf that contrasts the gesso white beautifully. The brilliance of this design by Tom Caldwell doesn’t stop there: it continues in the pared-down quality of the stems from which the shades extend, which grow thinner as they move toward the petals; the circular details on these, which create an elemental knottiness like that of bamboo; and the elegant shape of the small cup from which they branch out. 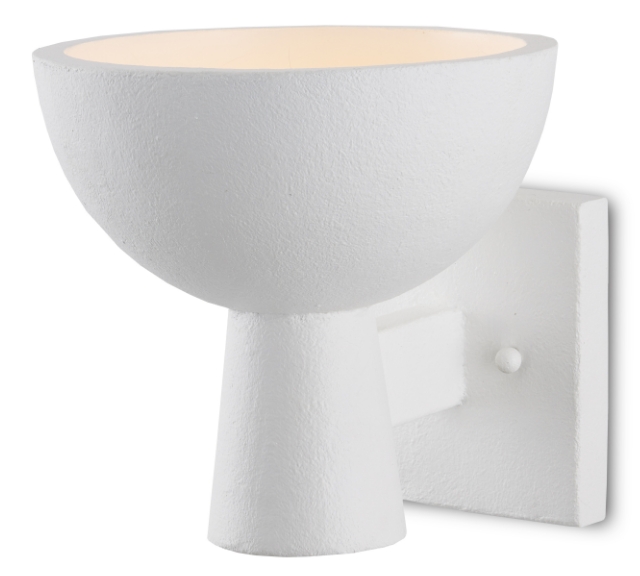 Made of wrought iron in a crisp textured white finish, the Revett Wall Sconce is part brutalist masterpiece and part contemporary luminary. The strongest artisanal touch is how thickly and evenly the stippled finish coats every element of the exterior of the sconce, as if its designer took a cue from modern architects who avidly build crisp white edifices so they will gleam against bright blue skies. The chunky shapes that make up its profile will make this a shoe-in for industrial chic interiors. This sconce can be hung to reflect up-light or downlight. 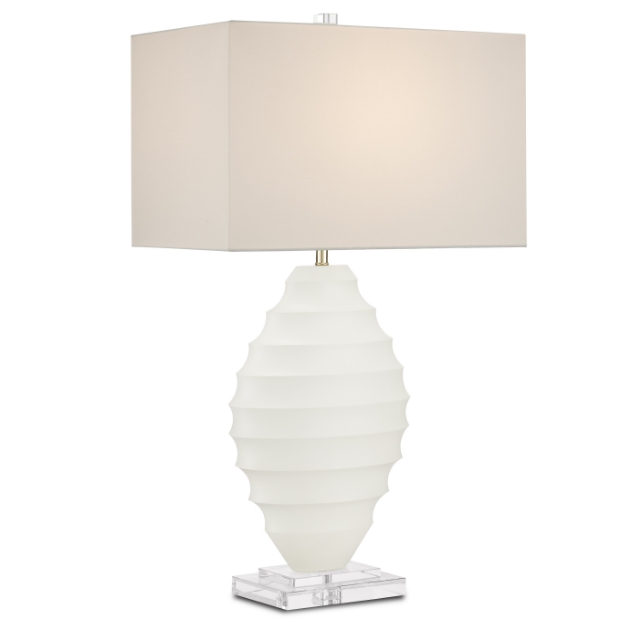 Designed by Tom Caldwell, the Abbeville Table Lamp is an ethereal composition. The stylized oval with its peaks and valleys is made of composite with a flat white finish. Scale-wise, the shape of the white linen shade is perfectly in balance with the stacked optic crystal base. The brightness of the polished brass finish on the hardware all but disappears, as does the optic crystal finial to bring the white table lamp the ultimate lightness of being. 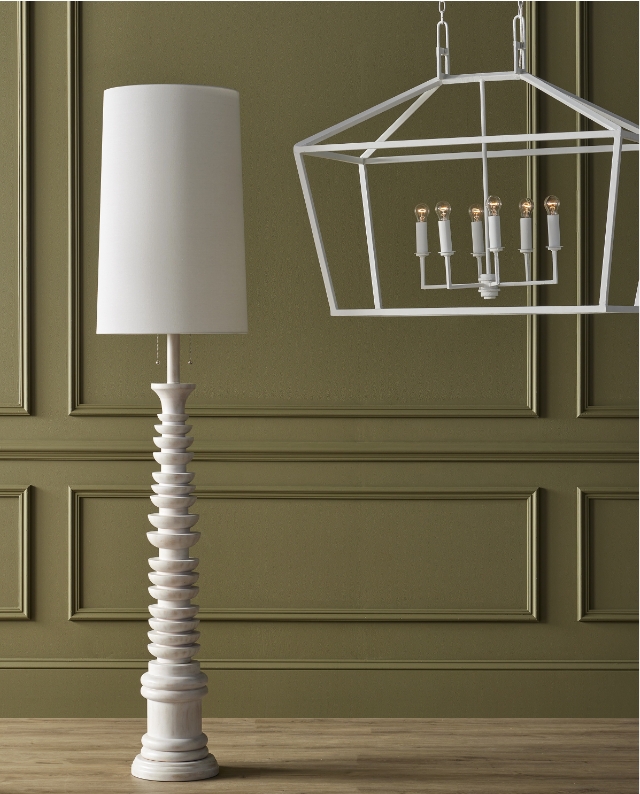 Shown with the Malayan White Floor Lamp is the Denison White Rectangular Chandelier, which is new. The latest offering in this extensive family of lights is a hammered wrought-iron fixture in a gesso white finish. This classic lantern shape has stood the test of time to make it one of our most popular offerings. A refined aspect of the design is the square that fastens the lantern to the chain. This white chandelier is one of a number of sizes and finishes in the Denison family. The pared-down profile and pale finish on this version makes it perfect for coastal aesthetics. 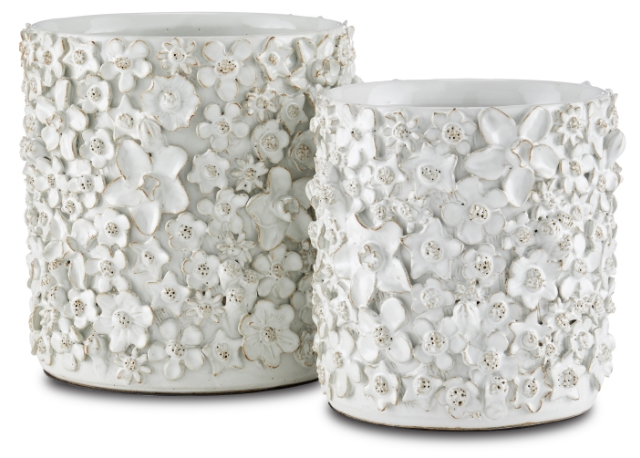 With a surface that is studded with beautifully fashioned white flowers, the Jessamine White Cachepot is truly an artisanal piece. Rather than apply one type of bloom, a number of floral shapes are intermingled to give the white decorative accessory a charm. The handmade character of the piece comes from the fact that each flower is created individually and applied, one-by-one, by hand. The white planter will be a plant's biggest complement. It is shown in this image with the small cachepot with an equally artful personality. 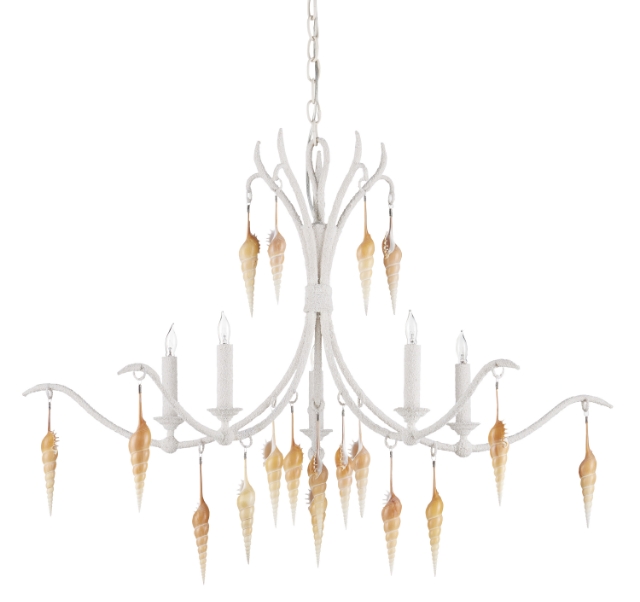 Tom Caldwell took one of the most popular chandelier shapes in our lineup and gave it a pale and pretty new life in the Arcachon Chandelier. The wrought iron frame has been covered in crushed shells to give it a heavy dose of tone-on-tone texture. Turbino shells dangle from the rings set in the arms that arch out and down or up and in to make the frame of the white chandelier a study in gracefulness. This is a design that fits swimmingly into our island-inspired offerings. 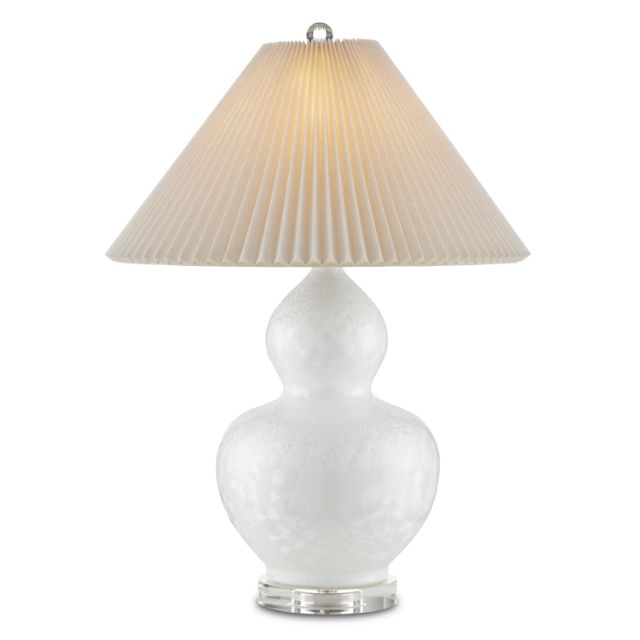 The Robineau Table Lamp has an ethereal beauty that is hard-won. The white crystalline glaze on its surface is achieved by a diligent process that creates the subtle pattern. This happens when actual crystals are grown in the glaze during the firing process to provide the porcelain table lamp the mottled pattern that makes it so beautiful. Other effervescing elements are the optic crystal base and finial. The knife-pleated off-white linen empire-shaped shade has a grounding effect on the composition. 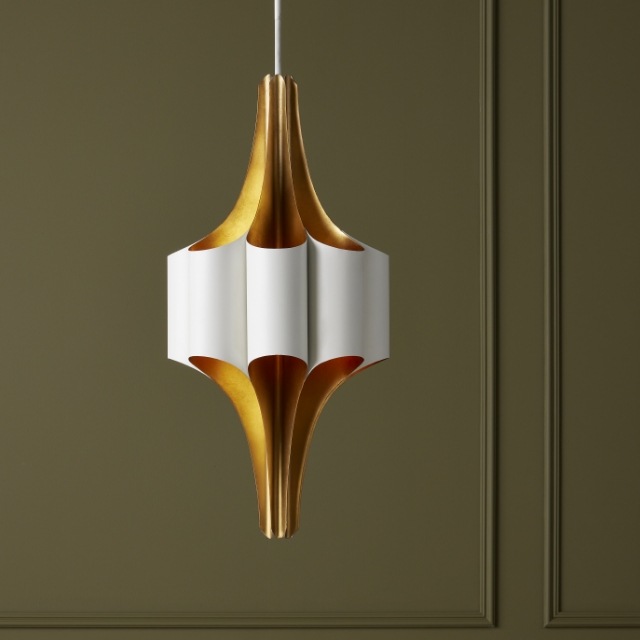 With the Concordia Chandelier, designer Ian Thornton was keen to create a fixture that would be perfect for a foyer space in size and scale. He played with folded metal to turn the creation into a modern interpretation of a ribboning profile. He then finished the exterior and the clean-lined rod from which it hangs in a painted gesso white and had the interiors slathered in a contemporary gold leaf that warms the illumination. Because the gold chandelier has both up-light and downlight, it is a terrific choice for spaces that require maximum illumination. 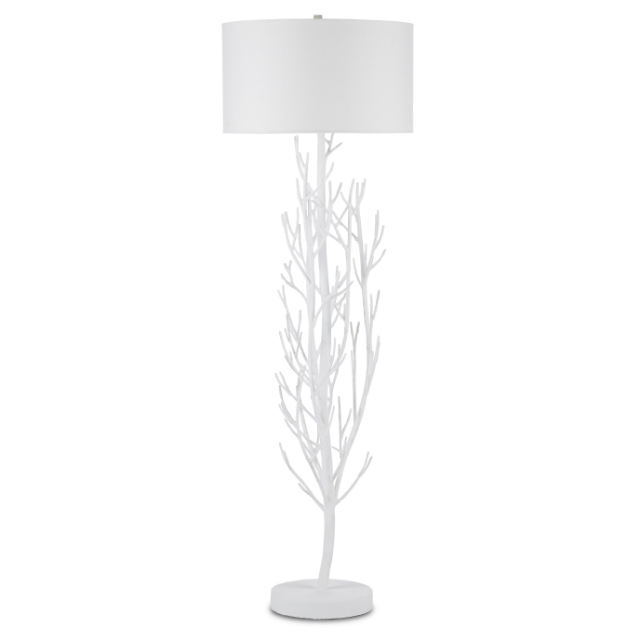 The Twig Floor Lamp illustrates Clarence Mallari’s aptitude at taking cues from nature and turning them into beautifully refined light fixtures. He was playing with how he could make twigs flow, though he was certain he didn't want the wrought iron composition to be brown. By using a gesso white finish, which is very heavily applied, he created a more glamorous version of the limbs we see everywhere every day. The off-white linen shade was also a studied choice, as he knew the large drum shade would bathe the white floor lamp in ample illumination to make it shine. 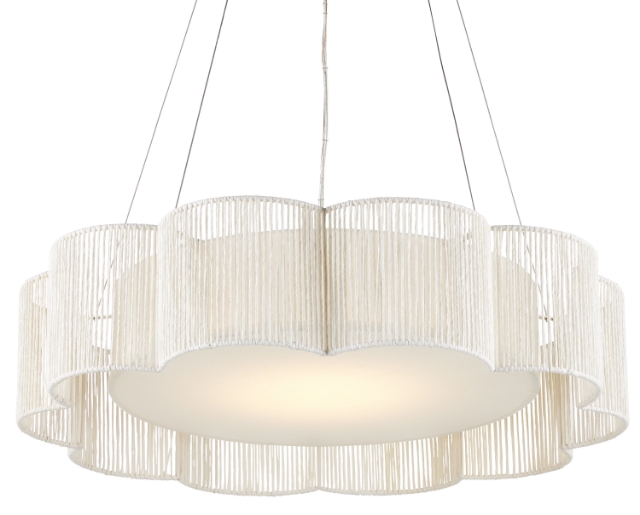 Scallops of Kraft paper twine fold around the wrought iron frame of the Ancroft Chandelier to form a delicate flowing silhouette. The string has a white finish that works in concert with the contemporary silver leaf on the metal to keep the white chandelier light and airy. This is enhanced by the fact that it is hung from aircraft cable, which is adjustable. The integrated LED light flows through a diffuser fitted to the bottom of the shade. 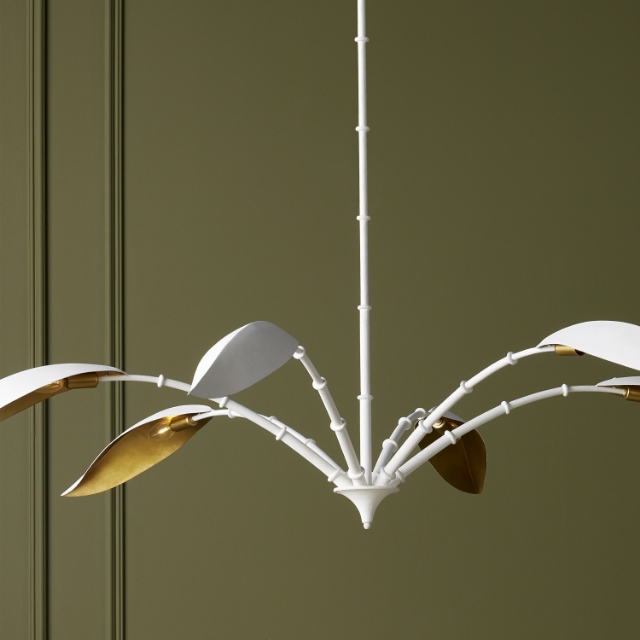 The Yuriko Chandelier glowing against a deep olive-green wall, the contrast illustrating how white can take on an ethereal feel in a space.

We hope you enjoyed the newest of our pale products that will make it a snap when it comes to furnishing a white Christmas. With this last post of 2022 (we’re off next week), we’d like to thank our loyal readers and wish everyone a safe and satisfying holiday season, and a prosperous New Year! We’ll see you back here on January 3, 2023.

← Decorative Trays for the Holidays