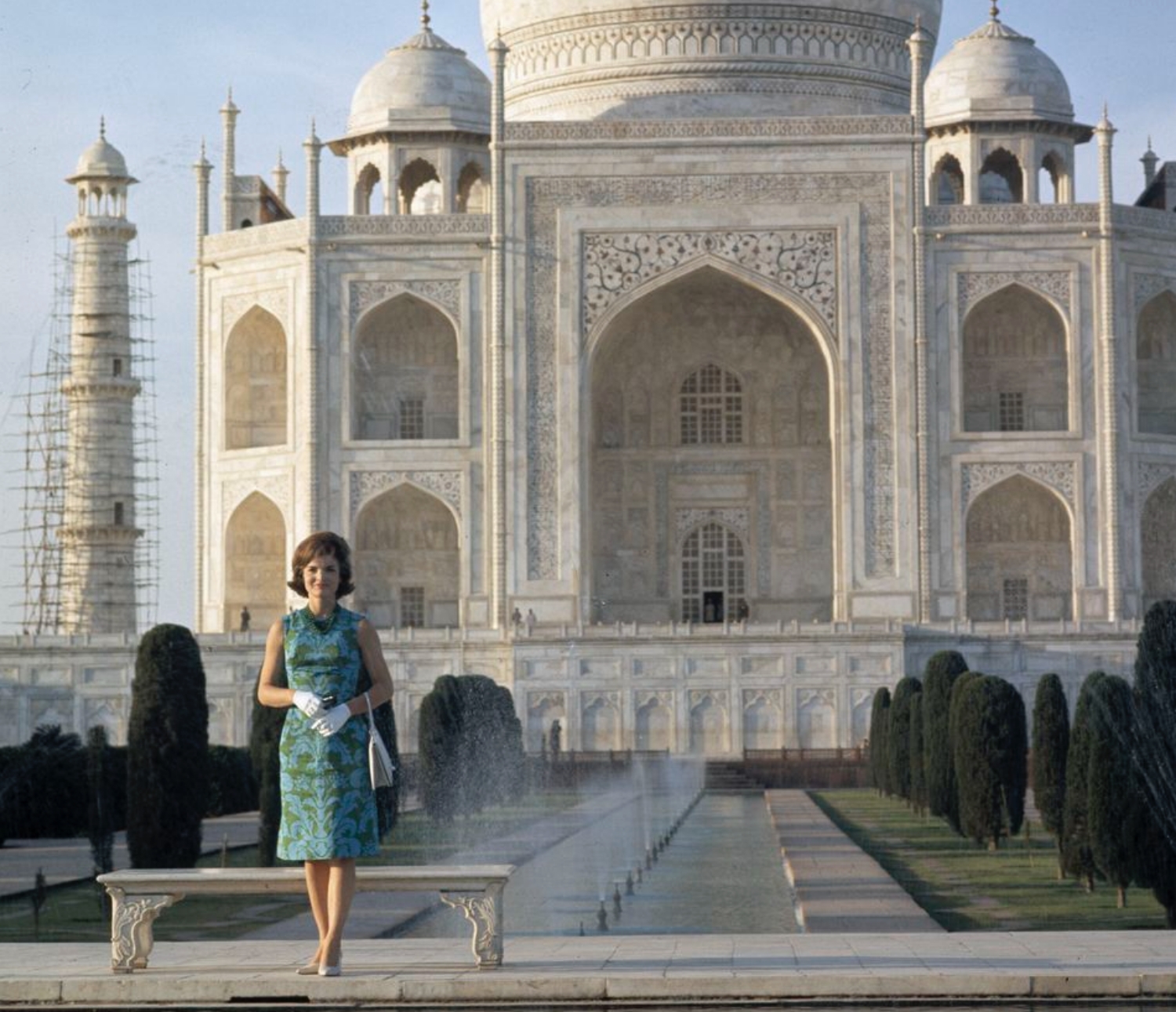 Jacqueline Kennedy Onassis lived in her Fifth Avenue apartment in New York City for more than 30 years. The home overlooked central park and was a pinnacle of restraint, style, and comfort given the refinement and elegance she created with books, busts, art, skirted tables, decorative boxes, antique furniture, and blue and white accessories. One look at the image above, taken in front of the Taj Mahal in 1962, and the aesthetic classicism she embraced, now widely known as Jackie O style, comes easily to mind. She was photographed by Cecil Stoughton and the image is courtesy of the White House Photographs, John F. Kennedy Presidential Library and Museum/NARA. 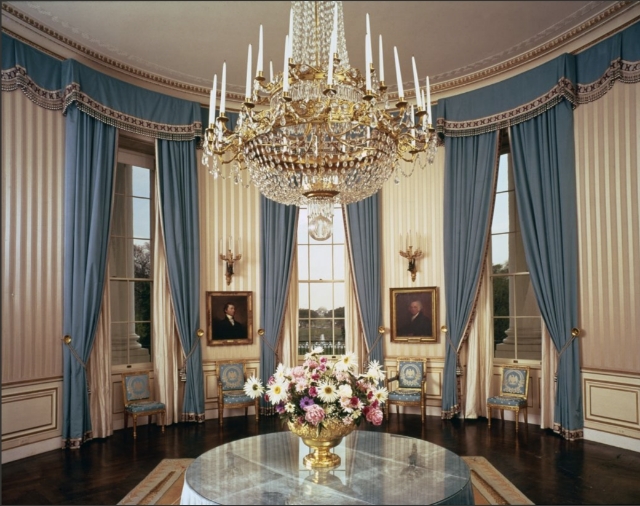 Shown directly above is the Blue Room in The White House as decorated by the tastemaker when she was First Lady, which was also in 1962. It illustrates her love of antiques and her phenomenal sense of proportion. As a nod to that tremendous sense of style, we thought we’d take a tour of our offerings with attributes that echo her taste. Several of these, such as the Ming accessories, are now on sale during The Main Event, which kicked off last week. The sale includes over 650 designs and is offered to the trade only. 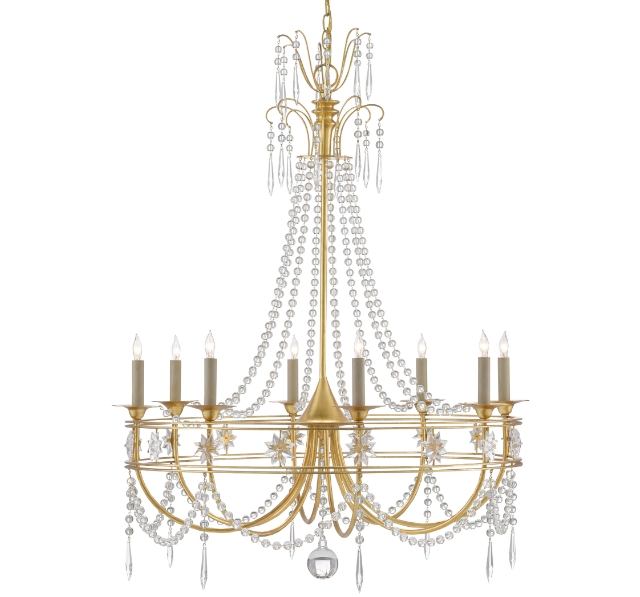 We could easily see our Dream-Maker Chandelier illuminating a space in The White House during the Kennedy era. Made of wrought iron in an antique gold leaf finish, the beautifully ornamented beaded chandelier is classic in its detailing. Clear beads swag along its frame in perfect harmony with the curved arms that drip luminous crystals. The gracefulness that is achieved with a design like this is hard-won, as the crystal elements are all fitted perfectly to this gold chandelier by hand. 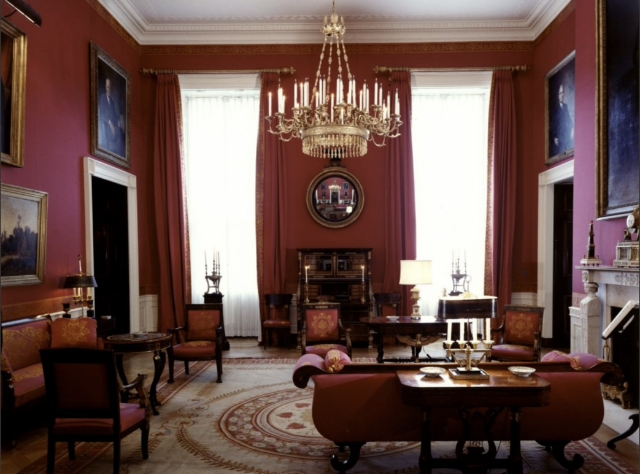 Sotheby’s auctioned off Jackie O’s estate in April of 1996, a sale that took place over three days. In the catalog, the extensive look at her impact as a woman and a First Lady is a fascinating read. Its publishers talk about the monumental undertaking she embraced during the restoration of The White House and how the staff loved her because she was known for her great sense of humor. They cite as proof a Christmas gift for a chief usher. It was an embroidered pillow that said, “You don’t have to be crazy to live here but it helps!” 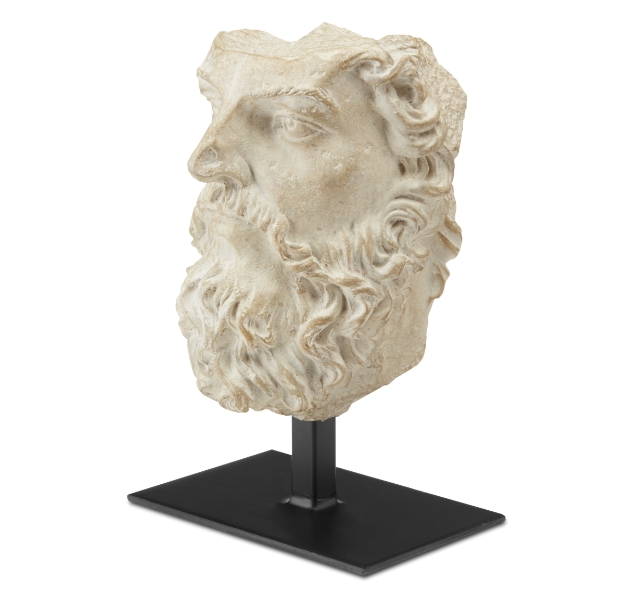 The Head of Zeus is an antique-inspired sculpture that reads as authentic.

Of course, Jackie’s apartment on Fifth Avenue was cozier and much smaller in scale than the formal presidential residence, but it was equally reflective of her authenticity. On an antique chest in the living room, was arranged a collection of artifacts that included a grouping of busts—a Greek Icon of Deesis from the 18th century was on a stand, as were a Hellenistic Marble Head of a Goddess from the 2nd or 1st Century B.C., and a Roman Marble Head of a man from the 3rd Century AD. Our Head of Zeus, shown above, masquerades as an artifact with the same period style. Made of composite in an aged beige finish with random spritzes of antiquing, the marble-like sculpture has two artisans to thank for its feeling of authenticity: the mold maker, who is central to the work; and the painter, who hand-paints the piece to create the illusion that it was unearthed after being carved ions ago. 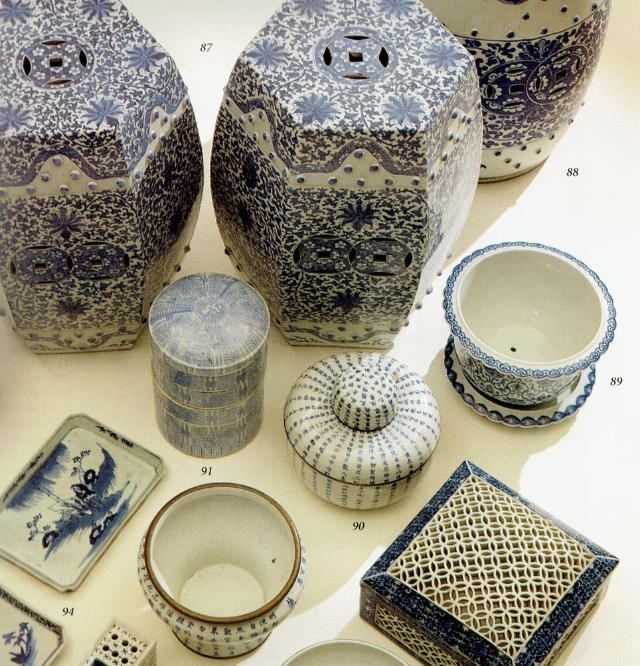 Sprinkled throughout her apartment was a sizable collection of Blue and White porcelain from China, an image of several of her pieces shown above. The accessories included garden stools, jardinières, vessels, decorative boxes and trays, and flower bricks. She also owned two very large Blue and White planters that flanked the fireplace, each filled with split logs to be burned when a cozy fire was on the agenda. 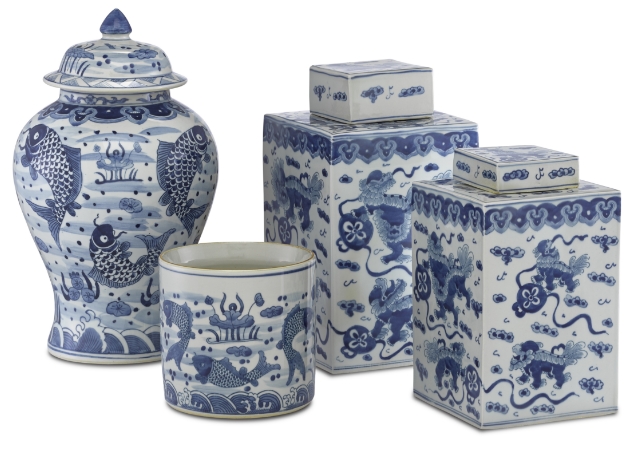 Our Ming accessories were created is the same spirit as her antique and modern pieces. Our vases and vessels are made of heavy porcelain that makes them equally sturdy. They include the Ming Temple Jar, the Large Lidded Jar, the Small Lidded Jar, and a Planter. The body of these were hand-thrown and hand-painted with the same pigment that was being used 200 years ago. The white porcelain is so white it has a bluish quality. Each of our Ming accessories is on sale during The Main Event. 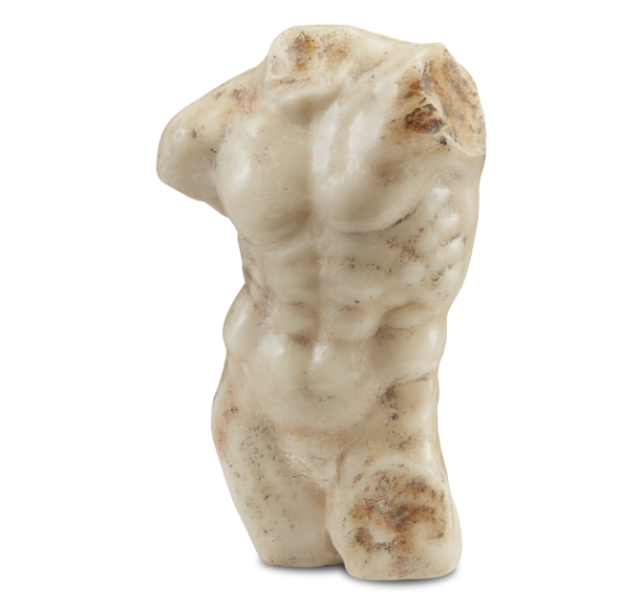 The Ancient Greek Torso postures perfectly as an antique, though it is new.

In the entrance hall of Jackie’s apartment was a beautiful table set with an arrangement of accessories that included a Roman Marble Torso of a God or Hero from the 2nd century A.D. Our Ancient Greek Torso imitates the timeless appeal of an artifact, though it is made of composite in an aged beige finish with random spritzes of antiquing. This marble-like sculpture also has two artisans to thank for its feeling of authenticity: the mold maker, who is central to the work; and the painter, who hand-paints the piece to create the illusion that it was unearthed after being carved ions ago. 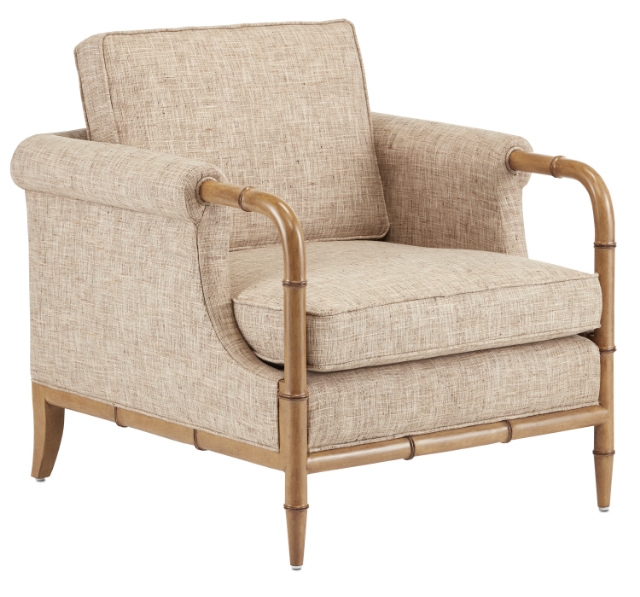 The Merle Finn Safari Chair was inspired by a number of tastemakers throughout history.

Also being auctioned off at Sotheby’s was a Regency Paint-Decorated and Bamboo-Turned Armchair from the Early 19th Century. Just as vibrantly as Jackie did, Barry Goralnick, who designed the Merle Finn Safari Chair, recognizes the value of decorating history. He says of the chair’s stylistic legacy: “Faux bamboo has been popular for centuries—from Louis XVI to Billy Baldwin, the element has been found in many lavish designs.” Though the Merle creates a more comfortable sitting experience, it is very close in lines to the one Jackie owned. The frame of the Merle is made of beechwood in a weathered walnut finish; because the arms and back are wrapped in upholstery, the chair is very comfortable for the human form.

The beautiful clock on the exterior of Grand Central Terminal in New York City is reminiscent of Jackie O style in its classic detailing.

Jackie O style has a far-sweeping presence in the history of design in our country. Not only was her restoration of The White House one of the most important undertakings by a First Lady, she spearheaded the effort to save Grand Central Terminal in New York City from being bulldozed and replaced by an office tower. As Tina Cassidy wrote for Bloomberg News, “Onassis was outraged in early 1975 when Grand Central’s landmark designation had been voided by the court, clearing the way for the railroad to build over the station with a Marcel Breuer design that looked like a shoebox lid standing on its side.” She joined the fight to save the station then and there, and the rest, as they say, is history!

Also creating a lasting legacy in design year after year is the Cashiers Historical Society, a group of dedicated champions devoted to organizing and presenting a designer showhouse each summer that funds their activities. With their theme, “Tradition…Reimagined,” this year’s event kicks off in a few days, August 26, and will be open for tours through September 4. If you are going to be in the North Carolina mountains while the event is underway, you can still buy tickets online in advance. The opening party is the evening of August 25, and the organization has much to celebrate as this is the CHS’s 25th Anniversary. The above sketch hints at the charm the mountain retreat will exude when it is completed.