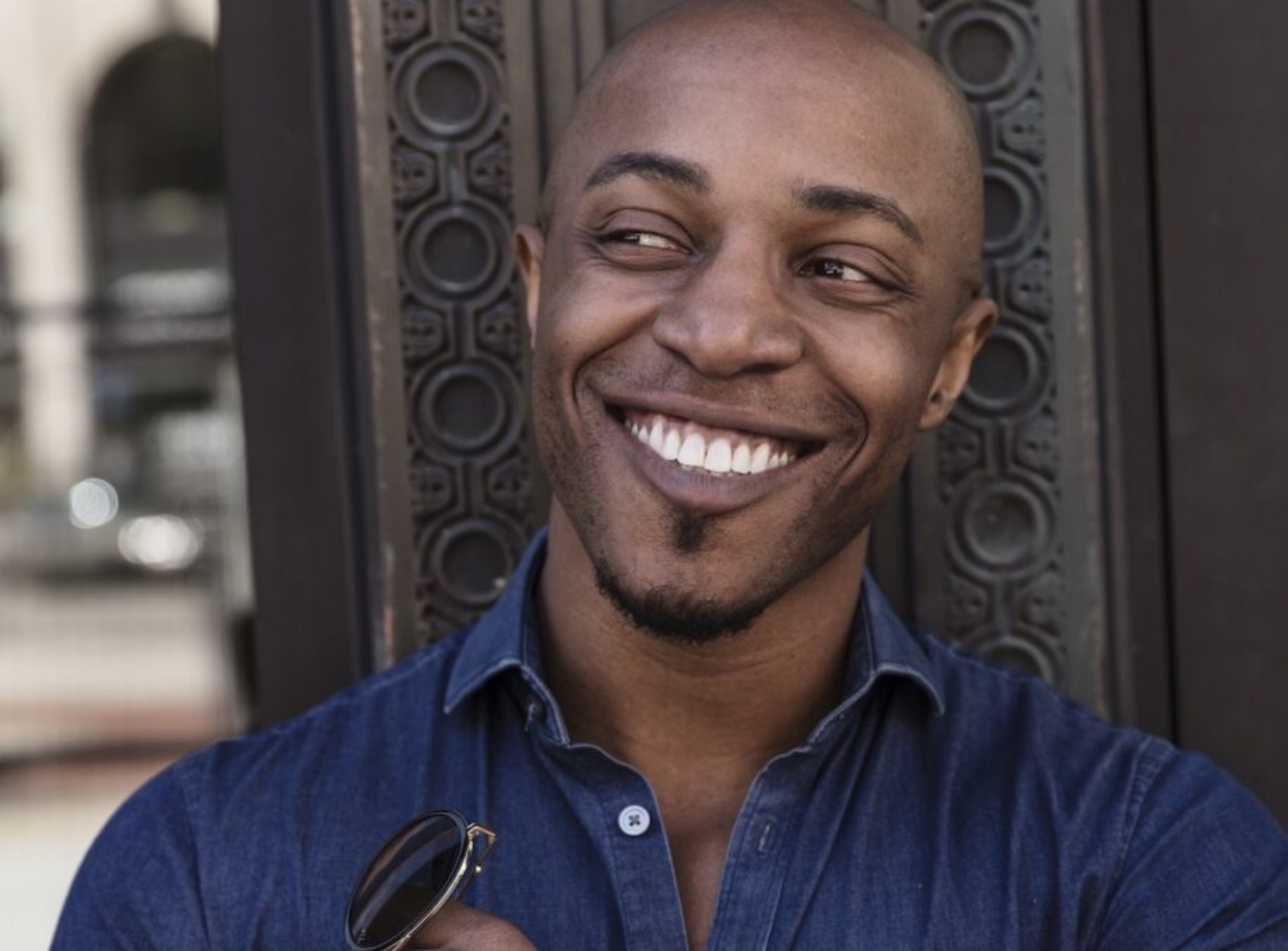 In his Foreword to designer Corey Damen Jenkins’ book Design Remix: A New Spin on Traditional Rooms, Jamie Drake writes, “Corey Damen Jenkins is a man of enormous confidence and great style.” We couldn’t agree more. He truly lights up a room when he enters it, and everyone who knows him seems to step a bit lighter as they move toward him. Perhaps Jamie summed it up best with this statement: “From the start, I have always been attracted to Corey’s suaveness.”

The cover Design Remix that showcases the work of Corey Damen Jenkins.

As the book flows forward, Corey describes his journey through childhood and his determination to be a designer. Titled 779, the introduction is an intimate look at his struggle: “My plan was simple: Find doors, go knock on them,” he writes. “I told myself that I would knock until I found someone to hire me to design their home or hit one-thousand rejections—whichever came first.” He strategized this effort down to the neighborhoods he selected, choosing those with the nicest homes. “And then I came to the 779th door,” he explains. “‘A gentle word opens an iron gate.’ This Bulgarian proverb is now dear to me. Door number 779 was actually behind a pair of wrought iron gates that, once opened, led me to a polite, welcoming couple in need of a designer.”

And the rest, as they say, is design history! His maturity as a designer is evident as he shares his thoughts on successful projects. “The Bold Standard,” “Good Bones,” “Less>More,” and “Eclectic Exuberance” are powerful chapters that unfold with wit and wisdom. “Where I come from, being bold has a bit of a reputation,” he quips. “In Michigan, being toned down and making safe choices in fashion and design are the norm; a bit of flair is not really part of the lingua franca.” Fortunately, Corey learned a number of foreign languages that bring the spice to his work to which everyone responds.

Opening the chapter describing his take on less is more, he notes, “I’m an unabashed lover of classic design elements that have stood the test of time because they have integrity and purpose. But if there’s a central tenet to my design philosophy, it isn’t tied to any particular style.” Our Lucien Chandelier graces the above living room in this chapter. About the design of the space, he says, “This room is an example of how less color can still be bold. The umber walls are impactful because of the richness of the hue—you feel like you are being bathed in chocolate when you step into the room. Even the oversized chandelier has a lightness because of its wispy, elegant lines.”

Also in this chapter, in the above home office, is a pair of our Double Hex Wall Sconces. Corey describes his M.O. as he designed the space: “One thing I love best about a less-is-more approach is that when subtracting color and pattern play, shapes and geometric details—like the chunky, scalloped legs of this desk—really have a chance to shine. It’s also an opportunity to get creative with texture, like the three-dimensional art across from the desk.” 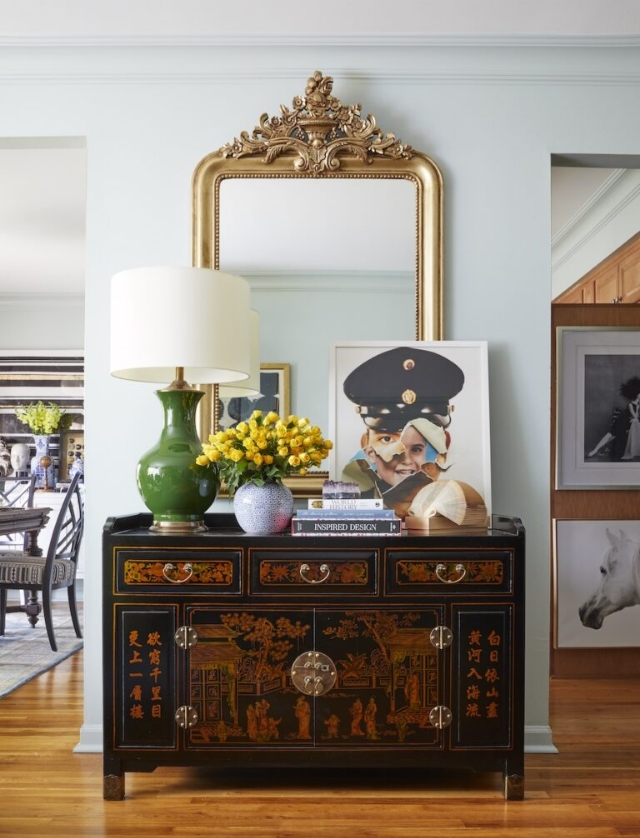 About the image above, which includes our Lilou Green Table Lamp, he notes, “In the entry, I paired this hand-painted chinoiserie credenza with a piece of contemporary art by Antonio Pulgarin.” The mixing of styles here is truly masterful. The chapter entitled “Eclectic Exuberance” ends with “Style Cues,” about which Corey says, “Fashion is the way that I take my clients’ temperatures on a lot of design issues. If I see they wear a lot of patterns or have an affinity for a certain type of tailoring or silhouette, those preferences become starting points for my own brainstorming.” 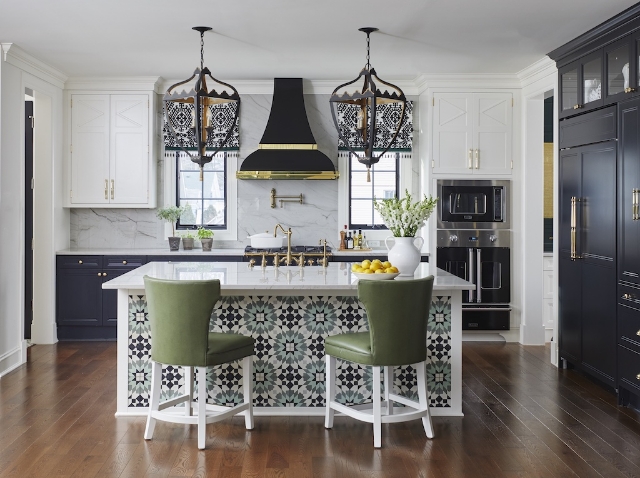 Two of our Beaumont Lanterns in this chic kitchen featured in the book. Image courtesy Werner Straube Photography.

In the chapter “Night and Day,” he notes, “An ivory-and-onyx approach is evergreen, with infinite possibilities for reinvention.” He chose two of our Beaumont Lanterns for the kitchen above, which has the subdued color palette about which he writes in this section of the book. About the room, he says, “The Moroccan pattern on the kitchen island doesn’t bring in a lot of extra color, but the geometric energy of it makes the room fun to be in, as does the mixing of black and white paints on the cabinetry. Instead of limiting a backsplash to just the area right behind a sink or range, I like to add drama by doing one fluid wall treatment from countertop to ceiling. This one is made entirely of quartzite.”

A Tree of Life

Corey ends the book with heartfelt acknowledgements, which he begins with, “The book of proverbs says that ‘expectation postponed is making the heart sick, but the thing desired is a tree of life when it does come.’ I believe this passage aptly sums up the making of Design Remix: it has been a tremendous—yet joyful—undertaking. And now, after years of anticipation, the reward has finally come! There are some special people who have been on this journey with me, and I would like to pay homage to them now.” This is a tremendously warm book filled with beauty and light. If you have room for one more design title on your shelf, we highly recommend it. You can order it through Rizzoli or on bookshop.org, a platform that supports independent bookstores financially.