When we received the call to sponsor and to contribute products to The Kaleidoscope Project Showhouse, we didn’t hesitate to participate. Not only was the showhouse staged in a historic bed and breakfast, The Cornell Inn, the 23 designers who transformed the spaces are BIPOC (black, indigenous, people of color). Even more appealing is the fact that the transformed spaces will permanently remain for guests to enjoy each time they stay in the inn.

The Main House of the Cornell Inn, circa 1888, is the original inn—it is one of two buildings The Kaleidoscope Project transformed.

The showhouse encompasses two buildings—the Main House and the Carriage House. There are18 guest rooms and suites, a lobby area, a small dining room, and a bar between the two buildings. The designers used as their inspiration the holistic triad of rest, reflection, and rejuvenation. The roster of talent that contributed is impressive. Tackling the spaces in the Main House were Virginia Toledo, who designed the dining room, named the Comparte Room; Everick Brown, who transformed the lobby into the Kutana Room; and David Santiago, who created the Acento Bar.

The Acento Bar, designed by David Santiago for the Kaleidoscope Project.

We weren’t able to attend the opening so we lived vicariously through this lively recap by Jane Dagmi, the intrepid editor-in-chief of Designers Today magazine. She said of the bar, which is crowned by our Fen chandelier, “Inspired by the Metropolitan Opera house, designer and acclaimed tenor (and IFDANY president) David Santiago, known as Santi, created a swanky mood with red and gold.” 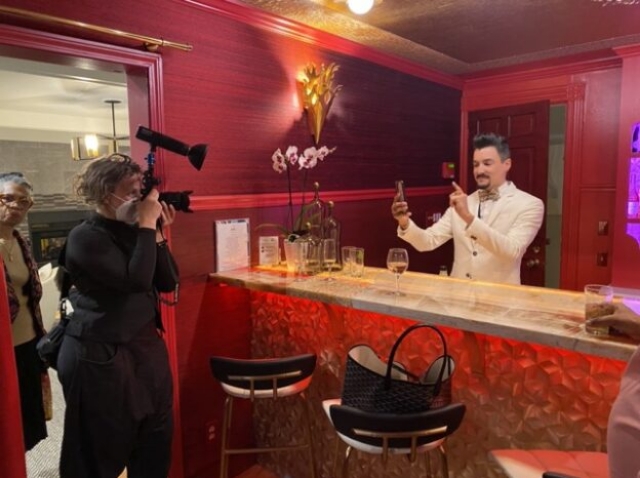 She went on to say, “He reinterpreted the opera house’s opulence using Scalamandre red silk wallcovering, Cole & Son Teatro wallcovering, a chandelier from Currey & Co, and art – a wall mural and portrait of Maria callas – by Ricardo Monge. Santiago created more drama by integrating lighting into the onyx bar and shelving.” Santi chose a pair of our Formby Wall Sconces, one of which is seen in the image above that was taken during opening night. 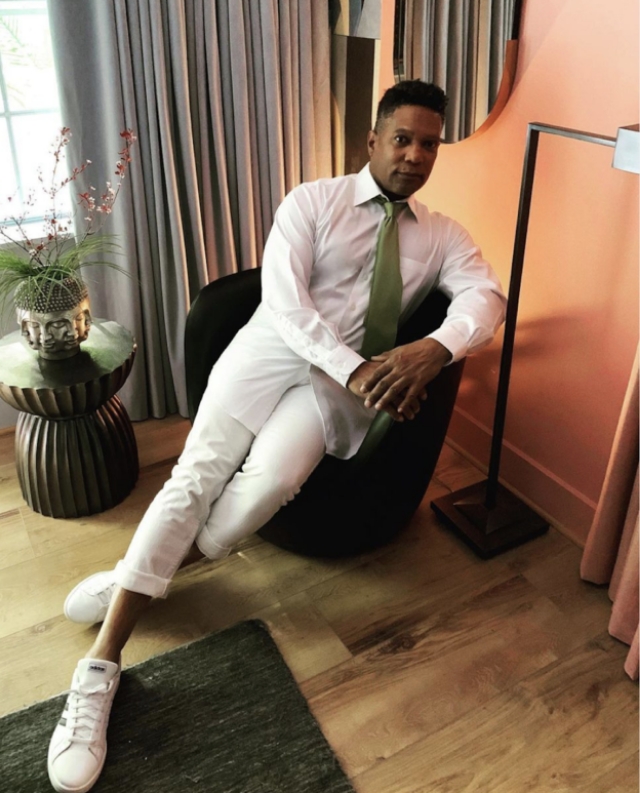 Rio Hamilton created the Teddy Room in the Carriage House. He’s seated in the L’na chair from Design Within Reach in the image above, which is upholstered in black leather. To his right is our Rasi Graphite Stool and to his left the Ruxely Floor Lamp. “Both are made from metal and have a gorgeous gunmetal-like finish,” he says of the pieces. “The pink hue on the wall is Bouquet Rose from Benjamin Moore.” About being able to tap our products for his space, Rio notes: “I was thrilled when I learned that Currey & Company was a sponsor for The Kaleidoscope Project Showhouse. Their beautiful and expansive collection of lighting, furniture, and accessories is perfect for hospitality projects like the revamping of the historic Cornell Inn.” 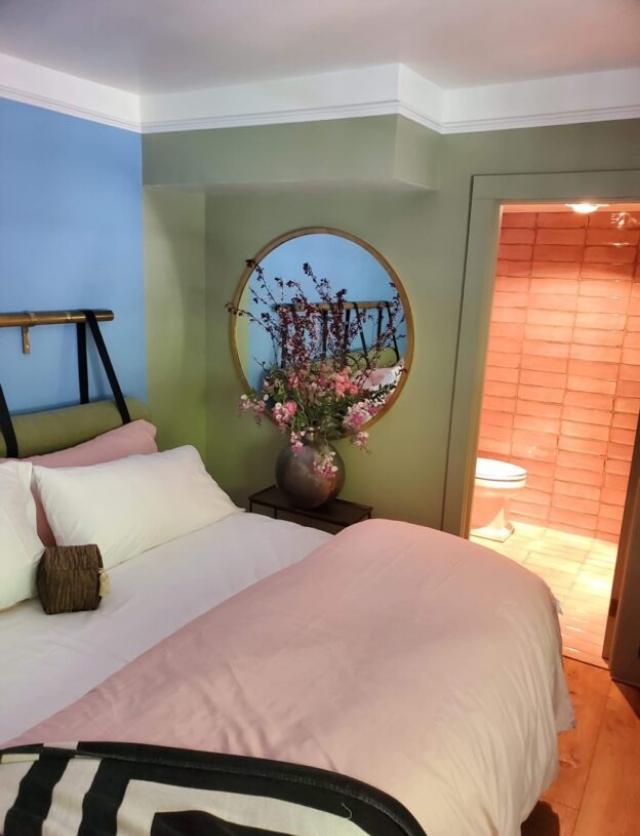 Our Aline Mirror graces a wall in the bedroom designed by Rio Hamilton.

He also chose our Aline Mirror, pictured above, and our Claude Ebony Bench, which he placed in front of a dynamically graphic wallpaper. Rio’s popular blog is celebrating its 6th year of featuring design, architecture, fashion, art, and profiles on rising stars in the creative world so if you haven’t stopped by lately, you should.

Jennifer Owen chose our Graz Table Lamp for her bedroom bathed in teal hues. Recognized as a fabric guru with an eye for color, Jennifer has achieved accolades for her unique sense of style and vision. She has been featured in myriad magazines. They can’t get enough of her definitive style, as she transforms spaces to uplifting, functional environments. Her spaces have been described as exhibiting her brand of “simple elegance” at its best. 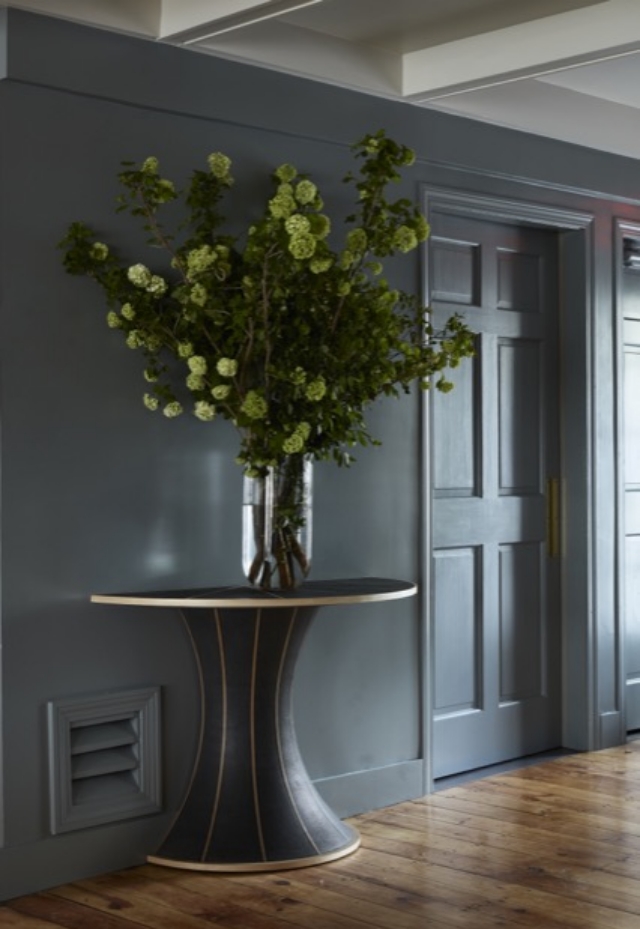 Everick Brown’s space, which he dubbed The Katuna Room, that he designed for The Kaleidoscope Project. Courtesy Photographer Frank Frances Digital Tech and Olivia Demetros. Stylist was Elvis Maynard.

Everick Brown named his space The Kutana Room. It is handsome with its luxe walls, and our Castille Demi-Lune, which debuted in the Denise McGaha Collection, looks beautiful against the rich hue. Everick is an interior designer with clients throughout the United States and abroad. Based in New York, he launched everick brown design in 2009 to dedicate 100% of his time to creating modern, elegant homes for a discerning clientele. 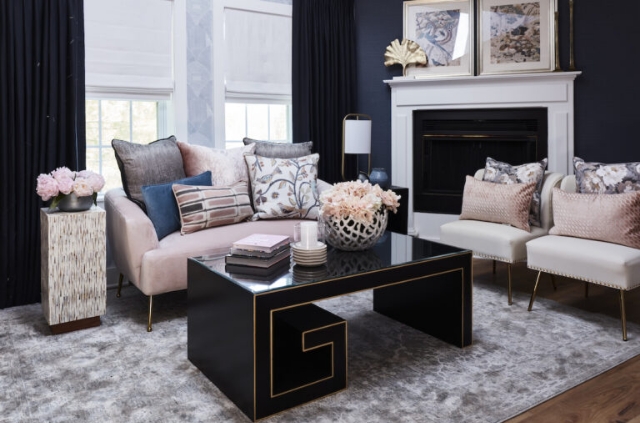 Nikki Njeri Klugh placed the Artemis Cocktail Table, in our Barry Goralnick Collection, and the Aquila Accent Table in her Cleopatra Suite. As the principal designer and owner of Nikki Klugh Design Group, Inc., Nikki is also an award-winning interior designer and three-time best-selling author. Additionally, she is a media powerhouse whose interior design expertise and magnetic personality has led her to appear on BET, BET Her, NBC, San Diego Lifestyles, and The American Dream Show. 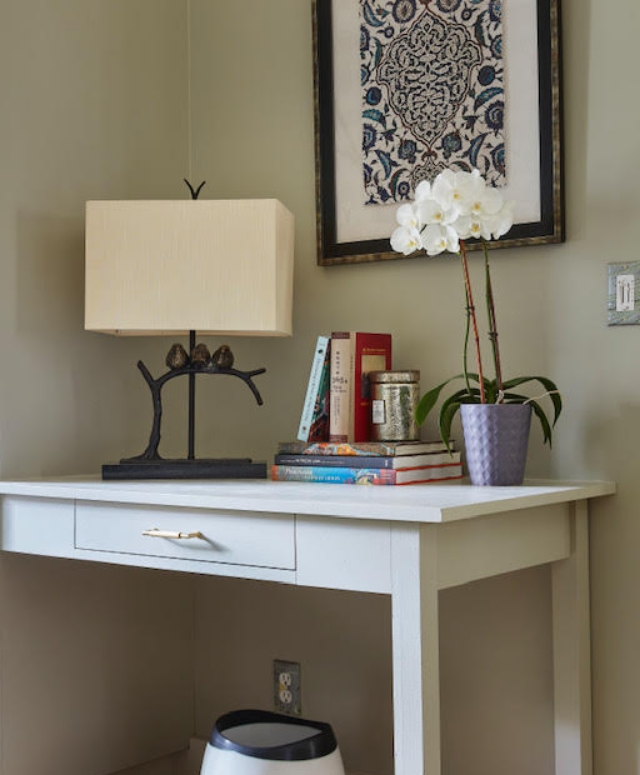 Doreen Chambers tapped our Sparrow Table Lamp for this vignette in her space within The Kaleidoscope Project showhouse.

In Doreen Chambers’ space, the Sparrow Table Lamp is a sweet accent adorning a desk. Doreen arrived in Manhattan to pursue a career at Estée Lauder and later Donna Karan Cosmetics & Home. It was during her position there when she first fell in love with the process of creating, developing, and accessorizing interiors. Those skills were later put to work when Doreen became assistant to world-renowned architect Peter Marino. After going on to study at the New York School of Interior Design, Doreen founded her design studio in 2001.

Christy Davis placed our Khalil Black Table Lamps on the bedside tables in her space. Jane explained the designer’s inspiration in her article: “A huge floral fan, Christy Davis paid homage to the historic B&B while modernizing the vibe, juxtaposing bouquets from Lee Jofa with a metallic geometric from Thibaut. A punchy cheetah print on the benches, dark painted trim and black marble bedside lamps provide bold contrast.” 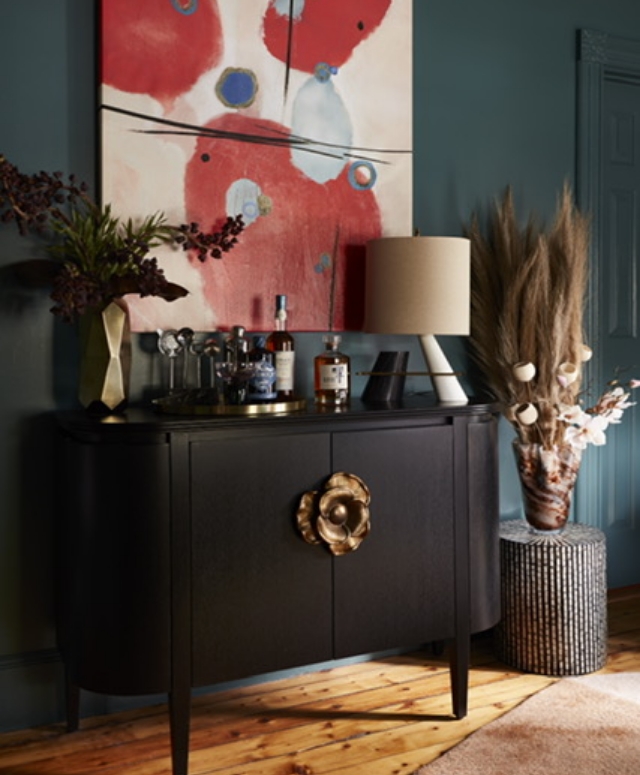 Rydhima Brar, who chose our Briallen Demi-Lune for her bedroom, explained her inspirations for her space in this blog post. “Imagine stepping up to the front door of a historic little inn in the Berkshires,” she begins. “It’s charming exterior hints at 18th– and 19th-century origins, and it sits on four acres of beautiful land, which — depending on the season — alternates between lush and green, blooming with wildflowers, glowing with fiery fall hues, or sparkling like a winter wonderland. It’s love at first sight, and yet… there’s SO much more to the Cornell Inn than meets the eye.” 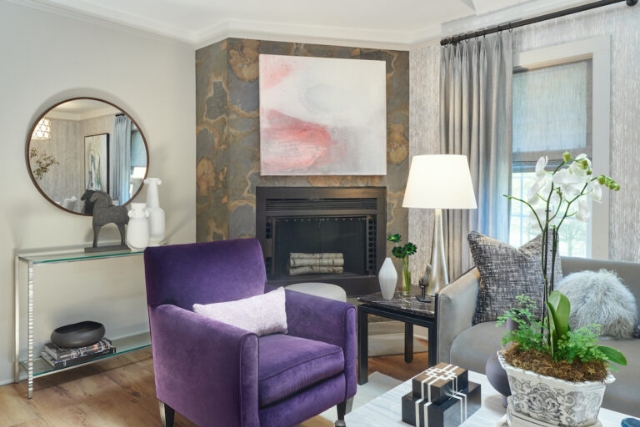 Dennese Guadeloupe Rojas’ space that includes a number of our accessories.

Dennese Guadeloupe Rojas included both black and white versions of our Happy 40 vases, our Black and White Lines Boxes, and our Logan Console Table, pictured in the above photo, in her space. Recognized as one of the Top 20 African American Interior Designers, Dennese is the owner and principal designer at Interiors by Design (IBD) based in Silver Spring, Maryland.

A Sense of Normalcy

Jane Dagmi feeling the love during the celebrations for The Kaleidoscope Project. Image courtesy Jane Dagmi via Instagram.

This photo of Jane celebrating the opening of The Kaleidoscope Project feels like the perfect note on which to end this look at an effort we were thrilled to sponsor. Her caption on the Instagram photo was, “In a good place. Life returning to normal.” It’s a sentiment we all can get behind. Be sure to read her article on her trip to Lenox, as she also visited author Edith Wharton’s home, The Mount. If you happen to visit the Cornell Inn, we would love it if you would tag us on Instagram if you take a photo of a room with one of our products in it. The hashtag #curreyco works just as well. Last day of #HPMkt and we hope everyone’s feet have held up after a year and a half of zooming while seated!

← Soulful Works of Art to Accessorize